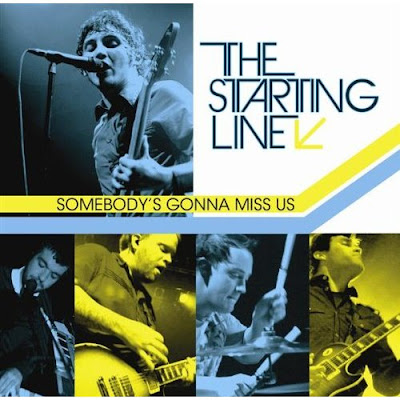 Somebody's Gonna Miss Us is an accurate title with qualifications. The Starting Line present as an energetic and engaging rock band, judging from the performance and crowd reaction on the album. The songwriting from this Pennsylvania trends a bit young at times, particularly in the lyrics department, but when The Starting Line hit on something they give it all they've got. The album starts a bit slowly. Given The Chance is a great opener, a mid-tempo rocker built on a vibrant Pop hook. The audience is fully engaged, singing along en masse to the chorus, but Greg's Last Day is decently inconspicuous. Almost There, Going Nowhere is also very catchy; virulently so. Vocalist Ken Vasoli has a great clean sound and he has the crowd eating out of the palm of his hand. Direction, on the other hand, has none. Up And Go is the early highlight; a song about having to watch someone you love walk away. The big, sing-along chorus makes it a concert favorite, and this is the sort of tune that could break big at College and even Commercial Radio.

Things get a bit rocky in the middle. Inspired By The $, Are You Alone and Ready don't really jump out, and This Ride is cookie cutter Modern Rock, but The Drama Summer shows a bit more versatility from The Starting Line and makes you think that these guys might just be for real. The song has the strong, big chorus these guys seem to be consistently capable of, and the crowd is engaged to the point of distraction. I'd be curious to hear the band run through this one without all of the interfering noise. The show is going well, and The Starting Line is beginning to really get their feet under them. Bedroom Talk is catchy and well-written with a tremendous Pop touch; a song that begs to be licensed for a film. Ditto A Goodnight's Sleep, a song that may also have some potential at radio.

Something Left To Give is a shout out to family, friends and fans that avoids cliché but is a bit awkward lyrically. The good intent and natural charm of the song overcome this deficit however, and it turns out to be one of the pleasant surprises of the album. Somebody's Gonna Miss Us finds The Starting Line coming fully up to speed with a catchy melody that will stick around after the album's done. The final two tracks are the true highlights of the disc. Photograph is the sort of tune you stick in the middle of a movie soundtrack to sell copies of the soundtrack. With the right breaks/push this is a surefire hit. Best Of Me closes things out on a high note; an upbeat tune with a chorus that will set up shop inside your brain, kick whatever else you were thinking about out and play itself out until it grows tired of you.

The Starting Line has some ups and downs throughout Somebody's Gonna Miss Us, but the highs outnumber the lows significantly. Most any young band has a few holes in their set list at first; these get filled out over time as the catalogue grows and the chaff is worn away. The reaction of the crowd to The Starting Line is significant. Even accounting for the advantage incurred by playing in your hometown, it's very clear that when The Starting Line steps on stage they engage the audience fully. As live albums go, Somebody's Gonna Miss Us is impressive. The production and recording might have moved the crowd back a bit sonically, as they do distract at times from the music itself, but on the whole it's a great effort.

You can learn more about The Starting Line at http://www.startinglinerock.com/ or www.myspace.com/thestartingline. You can purchase Somebody’s Gonna Miss Us as either a CD or Download from Amazon.com.
Posted by Wildy at 5:36 AM

It's a shame this band never got to release more albums... PersonaL is an interesting solo project by Ken but I still hold a special place in my heart for the Starting Line.

It is very true that people do miss the Starting Line, and I think they are well aware of that fact.