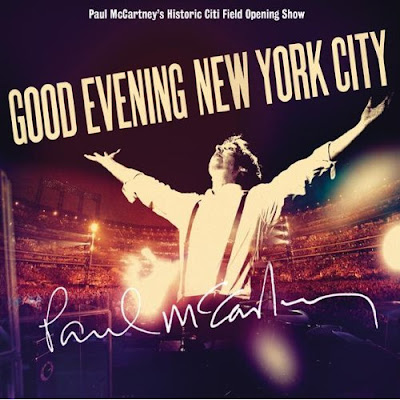 Between July 17th and July 21, 2009, Paul McCartney performed three shows at Citi Field in New York City, adjacent to the site of The Beatles first US concert (Shea Stadium). McCartney was inspired by the crowd, the location and the history; and all in attendance could hear him this time around. Folks who attended the show have acclaimed it one of his most brilliant solo performances, and the shows have taken on an almost legendary air. On November 17, 2009, Hear Music will be releasing the concert on CD/DVD in standard and deluxe editions as Good Evening New York City. The standard edition features 2 CDs plus a DVD of the show shot from 75 flip-cameras distributed throughout the crowd over 3 nights. The Deluxe edition features a second DVD of McCartney's July 15, 2009 performance on the Marquee of the Ed Sullivan Theatre (previously only available as a stream on David Letterman's website).

The CD recording of the show(s) is a testament to an unparalleled recording career. Highlights from the Beatles' catalogue include Let It Be, Drive My Car, Got To Get You Into My Life, Hey Jude and Blackbird. McCartney's version of Let It Be is particular inspired, and he and the band totally let go on a rocking version of Helter Skelter. McCartney's re-working of Something on a mandolin he was given by George Harrison is absolutely magical, giving a different flavor to the song without losing the spirit of the original. McCartney digs into Wings classics such as Band On The Run, Live And Let Die and Let Me Roll It. He also works in a tribute to John Lennon with a medley of A Day In The Life and Give Peace A Chance. Perhaps the most magical moment of the recording however is Here Today. You have to wonder about the ghosts and memories that stood beside McCartney throughout this moving number. The other highlight for me was Calico Skies, a McCartney song I had managed to miss before now.

The DVD covers all 33 tracks presented on the 2 CDs, running 2 hours and 40 minutes. The HD shot show features both stereo and 5.1 audio tracks, each produced by Paul Hicks. Because of the crowd-shot techniques used the DVD manages to accurately recreate the concert experience better than live-to-DVD releases.

There's little left to be said about Paul McCartney. What becomes more and more clear with time is how vital a creative force he's been, both with the Beatles and on his own in various forms. McCartney will never fade into the Rock N Roll limelight; his contributions and influence are so pervasive as to be iconic. Good Evening New York City is a testament to this fact. It's not just another a live album, but an exclamation point on a career that, amazingly, just keeps getting better.

You can learn more about Paul McCartney at http://www.paulmccartney.com/ or http://www.thebeatles.com/. Good Evening New York City drops on November 17, 2009. You can pre-order the standard edition from Amazon.com on CD, Vinyl or a Download. The Deluxe Edition with the Sullivan Theater performance will also be available. The CD will also be available in Starbucks stores in the US and Canada.
Posted by Wildy at 5:45 AM