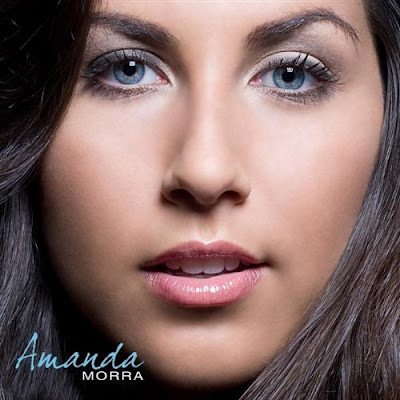 Amanda Morra is a Toronto-based singer/songwriter/dancer has done pretty well thus far for a 21-year old. Her songs are already starting to get spins at Dance, Pop and AC music formats in both Canada and the US. Morra has appeared in numerous commercials, print campaigns and short films; she teaches dance and is a University student on top of recently crafting her self-titled debut album with Producer Gavin Bradley (Nelly Furtado, Tori Amos, Jack Soul). There's little doubt she's driven, and even less doubt about her talent. All that remains to be seen (or heard) is the album itself.
Amanda Morra opens with Dreams, a decent Lite-Pop Dance tune with real club potential. The song is a bit on the tame side for sound but has a catchy chorus. Morra has an exceedingly pleasant voice that certainly doesn't impair the process. Room To Breathe features the mononymous George on a vocal duet that's a bit bland but likely ideal for Pop radio. Whiplash (with Steven Taetz) is kitschy and catchy enough to be a bit. There's a definite club vibe here, and the song makes you want to move. Strike One also has real commercial potential, and become something of an anthem with the right exposure.

Rewind (Stringapella) is the prettiest song on the album. Morra's voice is a bit limited but Rewind fits perfectly into her range and comfort zone. The string arrangement here makes the song click. More & More is a Pop ballad with a dance beat. The melody is quite good, in fact, although there is something of a cliché feel to the whole affair and the songwriting trends young here. If I Took You Home could be a real Pop hit. Again, there are elements of cliché to the song, but the sound is virally catchy. The jACK'd Radio Edit of Whiplash could find Morra surfing the top of the Dance charts. The Jinx Club Mix of Better Days, on the other hand, misses the bar completely.

Amanda Morra has a lot of momentum, and gets a decent push from her self-titled debut album. The songs therein are a mixed bag; some work and some just don't, but it's highly apparent that there's talent here. Morra's bio indicates she does acoustic sets with her material. Seeing such a show might tend to be very instructive about her future. The dance-based arrangements are okay, but one gets the impression that each song has a lot more to live and breathe. Seeing Morra live and acoustic might flesh out tunes that are occasionally one dimensional and plastic in their Dance/Pop presentations. On the whole, a strong effort.

You can learn more about Amanda Morra at http://www.amandamorra.com/ or www.myspace.com/amandamorra. You can purchase Amanda Morra as either a CD or Download from Amazon.com.
Posted by Wildy at 5:10 AM