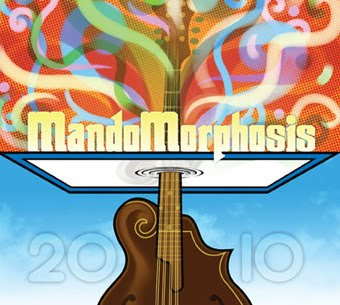 2010 opens with the brief cacophony of Crash before segueing into Matt's Idea, an intricate mix of Celtic and Bluegrass that challenges listeners across layers of sound. It's an energetic and intriguing opener that perks up the ears. A Minor Squabble is subtle with quiet conflict. On Santa Morena, MandoMorphosis offers a strong southern European feel built in a classical musical engine with a theme that rises with incessant force before spiraling away like a child spinning in a field. There's a joyful spirit here residing beneath the weight of the world. CrimeDog is a real barn burner, a Bluegrass jam with a contemporary feel that will make you want to get up and dance.

Hamhock's Razor is an active and interesting piece, heavy in musical complexity but built around the simplest of hooks. Occam himself would be quite pleased, both with the song and the word play. Perhaps the highlight of the album is Chopin's Nocturne Op. 9, No. 2. MandoMorphosis' reading is brilliant, catching the full melancholic force of the composition. It's a thing of beauty for the ears. MandoMorphosis, the song, plays fast and loose with the inter-relationship of musical parts. There's a New Music feel here, where each individual "voice" being heard is more important than how they necessarily work together. Another personal favorite comes on Out Of The Furnace And Into The Fire; which could be the soundtrack to a Grog-fueled kitchen party. Try and sit still. Just try.

The only song on 2010 with a vocal line is Nero's Fiddle, and the vocal line essentially becomes inconsequential in light of the instrumental work (a shame, because the vocal is quite well sung). The mandolin creates the angst and ardor of a world falling down around itself while drawing from a well of sounds cooked in the Far East. The violin plays on blissfully unaware while producing its placid counter-melody. Ghostown is a distinct turnaround, losing focus, direction and theme before the midpoint of the song. The fact that this is all by design makes it no less difficult to hear. MandoMorphosis steps back one hundred years or so for Ed, a Southwest flavored serene theme with hints of a real Pop melody woven throughout. 2010 concludes with Cascadia Raga, a ten minute-plus track that waxes and wanes between Raga and Bluegrass, occasionally entwining the two styles into a hybrid that's as hard to imagine as it is to walk away from.

MandoMorphosis isn't your typical Mandolin collective (if the world typical can even be applied to such). The musical tastes and inherent curiosities of the musicians involved lead them down twisty, strange and sometimes dark roads. Not every trip is a treat, and there are a couple of dead ends along the way, but on the whole 2010 is an experience to grow on. I highly recommend 2010 for its varied musical styles and approaches, creativity and overall sound. MandoMorphosis has done very well for themselves.

You can learn more about MandoMorphosis at http://www.mandomorphosis.com/. You can purchase 2010 as either a CD or Download from CDBaby.com.
Posted by Wildy at 5:00 AM