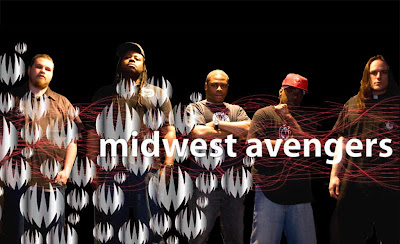 Midwest Avengers are the fastest rising Hip-Hop outfit on the St. Louis scene. The band has won the Riverfront Times Music Award as Best Hip-Hop artist for both 2007 and 2008 as well as scoring Local Album Of The Year honors for their debut album, Evil Superheros. Not ones to rest on their morals, Midwest Avengers are currently preparing for the release of their sophomore album, Headbanger Hip.Hop.

Headbanger Hip.Hop opens with the title track, reflecting a deep understanding and love for the history of Hip-Hop as an art form and as a sub-genre of Rock N Roll. The song calls out the divisions in the Hip-Hop community and calls all to come together for the good of Hip-Hop culture. Got.That.Thang is a series of short vignettes about the edge that breeds success on the streets and then ultimately turns on those who have it. Stalker is an entertaining diversion featuring vicious guitar work and a story about the sort of people who just take things too far. Infected is a song about social disease played with the dark musical aspect of a horror movie soundtrack. The risks of flying unprotected are explored in melodramatic fashion.

Coldworld expands on the ideas first ventured in Got.That.Thang, applying them to the general cut-throat nature of society. The same skills that breed success on the street are often applied in the boardroom. The weapons may vary, but the skills and choices are founded in the same primal sense of survival. Body.Rock takes a lighter tone as Midwest Avengers serve up a passable Dance/Party tune. N.E.W.S. celebrates the various subcultures of Hip-Hop as expressed by the four directions of the compass. The theme is coming together and celebrating differences rather than allowing them to tear the community at large apart as did the East Coast/West Coast rap wars of the 1990s. Midwest Avengers dig into a positive social message on Sometimes, celebrating those who take the hard path of improving themselves through hard work and education rather than falling prey to the "easy money" of the streets. It's a realistic song with real grit and makes a powerful point. Headbanger Hip.Hop closes out gently with She's Gone.

The sound on Headbanger Hip.Hop varies a great deal, but at their best, Midwest Avengers create the best marriage between Hip-Hop and Heavy Rock since Body Count pioneered the sound a decade and a half ago. Headbanger Hip.Hop is a bit uneven, and there are a couple of forgettable moments here, but on balance it's one of the most intriguing hybrid albums of the year. There's certainly enough good here to merit checking out Midwest Avengers and the band is different enough to ensure that listeners will be anxious to hear what comes next.

You can learn more about Midwest Avengers at http://www.midwestavengers.net/ or www.myspace.com/mwa314. No official release date for Headbanger Hip.Hop was available as of publication. Keep checking Midwest Avengers’ website and MySpace for more information.
Posted by Wildy at 5:10 AM