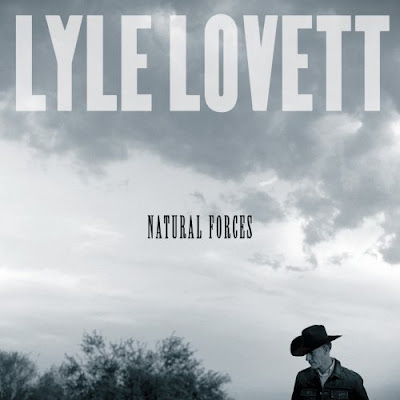 Singer; songwriter; actor; composer; the guy who married Julia Roberts. Most anyone with any sense of American Pop Culture over the last generation has come across Lyle Lovett at least once. Lovett is, in simple terms, one of the finest songwriters of his generation. Intense musical and creative talent sprinkled with the wit and wisdom of a native Texan are the trademarks of Lovett’s music over the years. Lyle Lovett released his fourteenth album recently, Natural Forces. It’s an album about loneliness and basic human need, although that theme is subtle and suggests itself slowly.

Natural Forces opens with the title track, a song about the primal rhythms that move migrating animals and people; those tied to the road/trail/sky to fulfill a deep-seated need for consistency. Rodeo riders seems to be the primary focus of the song, but truckers, musicians and anyone else who makes their life and living on the road will find something of themselves here. Lovett marries Country and Big Band/Bee Bop on Farmer Brown/Chicken Reel in a format so comfortable for Lovett it's practically a trademark by now. The musicianship is, as always, world class, and Lovett delivers a fun story song full of double entendre and wit with a wink and a smile. Pantry is based on the old adage that the way to someone's heart is through their stomach. The narrator is going away and essentially asks his wife/partner not to cook/eat until he gets back. Innuendo and clever word play fill the chorus against an arrangement that will set up shop in your psyche and refuse to leave without a court order. Empty Blue Shoes is a classic country song about the inevitability of heartbreak. With touches of The Blues thrown in, Lovett has created a song in Empty Blues Shoes that is destined to be covered time and time again.

Whooping Crane is a deep and elegantly written song about the impact that mankind has on the world. Some might take it as a purely conservationist message, but it seems even more pointed; a diatribe against the willingness of man to wipe out anything that gets in his way. The examples used here are unique to Texas and the American West (Whooping Cranes, First Nations) but the message is powerful and clear. Bayou Song displays one of Lovett's greatest talents as a songwriter. He has an ability to paint pictures with words and notes that transcend time and place like the ethereal movies that make up dreams. Bohemia celebrates a lifestyle where life itself is appreciated because the folks living it often have little else than their lives, talents and experiences. The song mixes Rock, Country and Jazz and a bit of Funk in a delicious musical confection you really need to hear.

Sun And Moon And Stars is a gorgeous tune about the loneliness that eventually comes to those who go through life alone. Even the most steadfast loner reaches a point where friendships gone by are missed. It's a powerful tune about the urge to return to your roots and not really being sure about what those are anymore. Loretta is a non-traditional love song about a barmaid and man who can't commit but can't stay away. It's a cute country store that fits in with the loneliness theme that seems to have worked its way into Natural Forces. Its Rock And Roll is an honest-to-goodness Rock tune about the here-today, gone-tomorrow life of Rock Stars. It's a great tune and a fantastic bit of social commentary from one who knows the ropes. Lovett closes out with an acoustic version of Pantry that might just be better than the amped up version earlier on the album.

Lyle Lovett waxes brilliant on Natural Forces, providing a listening experience that’s high quality for performance, songwriting and musicianship. Natural Forces is Lovett’s best work since The Road To Ensenada and seems likely to create some award buzz this year. Lovett continues to succeed because he’s never tried to be anything he’s not; bringing humor, warmth and a deep understanding of how to bring people, places and events alive in song. Natural Forces shows all of these traits, and looks well on the way to being one of the top albums of 2009 from a quality perspective. Natural Forces is a Wildy’s World Certified Desert Island Disc.

You can learn more about Lyle Lovett at http://www.lylelovett.com/. You can purchase Natural Forces from Amazon.com, or download it from iTunes!
Posted by Wildy at 5:42 AM