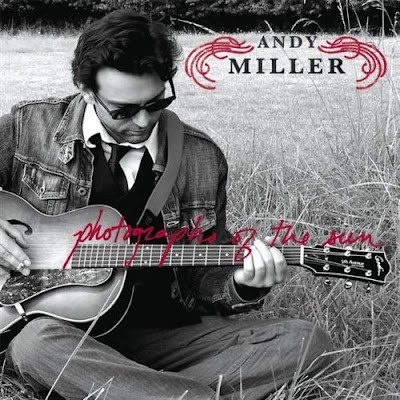 Americana is a term often used and rarely defined and has been used to describe such a wide range of music it almost becomes meaningless. It’s a melting pot of styles that’s become something of its own sound and can include Jazz, Blues, Rock, County, Classical and just about any other musical side dish you can mention. This is Andy Miller’s playground. The New York City (formerly of the Left Coast) based singer-songwriter has played almost every style of music in his career, and acknowledges influences as diverse as Skip James, Jimmie Rodgers, Kris Kristofferson, Tom Waits, Merle Haggard and Bob Dylan. His debut solo EP, Photographs Of The Sun, keenly displays this mix in troubled-but-struggling-to-be-brilliant fashion.

Photographs Of The Sun starts slowly, with Miller showing off his guitar skills on Hard Time Killing Floor Blues. The performance is decent although Miller ambles a bit without the constraint of the structure imposed by other players. The biggest problem with the song and the album in general, is the recording quality. Significant hiss or background noise can be heard throughout the song (and at various points throughout the album), detracting from the overall experience. Technical issues aside, Miller spends about half of the album with little direction or focus. Dancing On A Strangers Grave gives them impression from the title that real energy goes into the song, but it just never materializes. The end product sounds lost and directionless. Miller gets in the game with Formative Years, a Glory Days tune that's well written but could use the tension and support of additional instrumentation/personnel.

Miller falls back to the energy sapped approach for So Long and Spring Secrets, getting stuck in awkward lyrical turns and arrangements with little verve, but turns the corner on A Place To Rest My Weary Head. Miller has created a catchy, endearing folk tune that starts as a portrait of a family member that turns into a self-portrait. The anti-heroes here are two restless spirits in search of a home. Make Me Down A Pallet On Your Floor plays with the same theme; the song is well played and has a good melody, but could also use additional tension/instrumentation. Miller stays on a roll with Granddad's Blood, a song about the legacies that aren't always readily visible. In this case it also becomes something of an excuse for less than grand behavior. Miller does get a bit bogged down in the repetitive chorus at times, but in general has created a compelling song. The pendulum swings back the other way on the last three songs. My Troubles Will End and What About Me suffer from the sort of directionless, energy-starved approach that Miller opened with. The closer, Lord, I'm Coming Home, just isn't a great last impression to leave. With voice front and center, Miller dances about something vaguely related to the key the song is written in. It's painfully evident; and even if an artistic choice will turn off casual listeners.

Andy Miller is two artists on Photographs Of The Sun. One is a competent songwriter with an intriguing if not pretty voice; the other has a hard time getting out of his own way. As with many developing artists, I suspect the material here spans some time and may reflect different points in his development as a songwriter. At his best, Miller is a decent songwriter, but the production on Photographs Of The Sun is less-than-stellar. This does not leave a good impression on listeners in general, and certainly doesn't give Miller a chance to show himself at his best. Photographs Of The Sun is like a work in project. Andy Miller may be on the road to someplace interesting, but there's a lot of miles ahead yet.

Rating: 2.5 Stars (Out of 5)
You can learn more about Andy Miller at http://www.andymillermusic.com/. Photographs Of The Sun can be downloaded from Amazon.com or iTunes. No online outlet was noted for CD copies, although they do exist.
Posted by Wildy at 5:00 AM