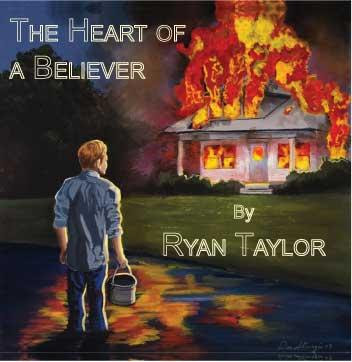 Ryan Taylor is a Hazlehurst, Georgia Christian singer-songwriter who believes he is called to be a psalmist. Taylor sounds like a modern rock guitarist with hardcore tendencies, and writes songs steeped in neo-Christian concepts. Taylor has a strong, clear voice and is a more than capable guitar player. He recently released his debut album, The Heart Of A Believer. Taylor sent us a three-song EP including the single Spiritual Suicide for review.

Taylor opens with the title track, a big active Rock song delivering an old school fire and brimstone message in a very modern package. Taylor has a very listenable voice, and the song is sonically pleasing, particularly for those who lean toward heavier rock. The in-your-face evangelical content will turn off some listeners, of course. Those Who Never Lived is a Pro-Life/Anti-Abortion tune that's a bit simplistic and cliché but makes its point. This is one of those situations where message gets in the way of the music. The chorus is actually pretty decent, but the song gets a bit bogged down in its own subject matter. Hands Of Life is written from the perspective of God speaking to sinners. The song itself is average, although Taylor's voice makes it eminently more listenable. The subject matter here has been done over and over in Contemporary Christian Music, and Taylor really doesn't add anything new in the process.

Spiritual Suicide is a great EP for preaching to the converted, so to speak, but don't expect it to make much noise outside of the CCM market. Ryan Taylor is young and full of the certainty of youth. The over-confidence of the intersection of youth and Faith is stamped all over Spiritual Suicide, and will likely do more to drive away those who don't believe the same things than open their minds to Taylor's beliefs. Musically, Taylor has real talent, and a taste for ultra-modern heavy rock that should fare him well as songwriting style and approach mature.

You can learn more about Ryan Taylor at http://www.ryantaylormusic.com/ or www.myspace.com/realryantaylor. You can purchase a copy of The Heart Of A Believer from CDBaby.com, or download the album from iTunes.
Posted by Wildy at 5:00 AM