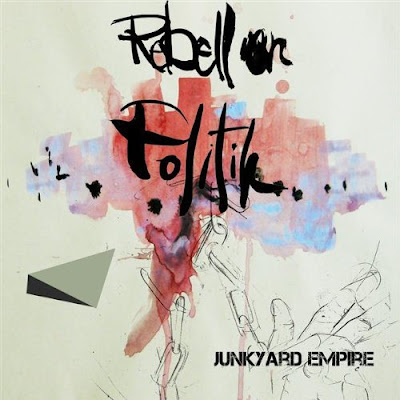 There is a land where Rock, Jazz and Hip-Hop meet over smart and passionate lyrics. It is a land filled with a vision of a better life, a better future, a better now. That land is the domain of Junkyard Empire, the Minnesota quintet that had their national coming out party on the last day of the 2008 Republican National Convention. Junkyard Empire leaves nothing unsaid; no political stone unturned, and spares no undeserving party from their social critique. This is the secret to Junkyard Empire’s second album, Rebellion Politik, a sometimes brutally honest musical roller coaster ride you won’t soon forget.

Junkyard Empire opens with Original Assumption, featuring Desdamona. The song deals with the seeds of urban decay as well as the seeds of recovering from the same. The song mixes elements of Hip-Hop, Rap and Jazz in an acoustic arrangement that is thoroughly enjoyable not only in spite of but for its apparent contradictions. Freedom is the concept explored; using some very apt social commentary to make serious points about what Freedom is and is not. Rebellion Politik is a call for Social Revolution based on Socialist Democratic principles and features some incredibly rapid fire rapping along with some highly enjoyable jazz improv on piano. Manifest is an exploration of how the powerful twist media, religion and anything else they can use to change the minds of people for their own betterment. The song hits on some of the big concepts and marketing pushes in American history and focuses on many of the things we do every day that have consequences far beyond what we can see.

RDM & Mr. Nox sit in on The Basics, a song that pays tribute to the history of Hip-Hop and calls on practitioners to remember where they came from musically. Conflict Part I (The History) looks at how the Israeli/Palestinian conflict came to be and where it is today. Junkyard Empire makes the point that Zionism began as a means to survival for Jews but has become a point of arrogance, implying that the movement has become hypocritical in light of its original purpose. To be fair, Junkyard Empire has a distinct opinion of who's right and who's wrong in the conflict, but the logical point of the song is probably worth some discussion in less polarized circles. Junkyard Empire closes with Alternate Energy Remixed, an entertaining party song that's highly danceable. It's a great light leave in the wake of some of the heavy subject matter that came before.

Junkyard Empire is the real deal. The rhymes on Rebellion Politik display a distinct lyrical talent steeped in intelligence and a strong sense of social responsibility. The acoustic arrangements are also a real treat, particularly when Junkyard Empire brings in elements of Jazz. Rebellion Politik is one of the top Hip-Hop/Rap albums I've heard in 2009.

You can learn more about Junkyard Empire at www.myspace.com/junkyardempire. You can download Rebellion Politik from Amazon.com, or you can purchase the CD directly from the band on their MySpace page.
Posted by Wildy at 5:10 AM