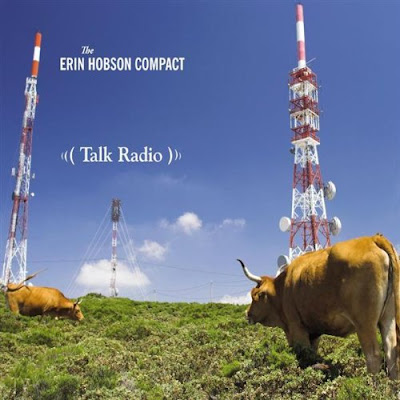 Erin Hobson has been bubbling under on the Indie Scene for a number of years. Critics love her, but widespread notoriety has yet to follow for the Rhinebeck, NY singer/songwriter. I suspect that’s all about to change with Talk Radio, Hobson’s latest project with her band, The Erin Hobson Compact. Top-rate musicianship, strong songwriting and a voice that’s unforgettable make this album a winner all around.

Hobson opens with the title track, displaying a clear, sweet voice and a gentle Pop-Americana style. Talk Radio hints at the tendency of people to differentiate themselves even when they aren't, whether through white lies, games or simple errors of omission. It's a strong tune; well and intelligently written with a great melody. Brick Wall is a fairly deep examination of the cooling of emotion over time in a relationship, with the object being both a buttress and a symbol of the loss. It's another great melody and another intelligently written tune that speaks on several levels to both the loving and lovelorn. Too Late is the story of someone fighting against their own human nature and their own base moments. It's a moderately upbeat tune with distinct sense of melancholy and a melody that melts into your ears.

Crash maintains the melancholic sensibility that pervades Talk Radio; taking on those moments when the world falls in around us. Hobson's voice is beautiful in anticipation of tragedy, and once again the melody is divine. Hobson kicks things up a notch with the honky-tonk Divide. Hobson is affable and sweet in a tune that decries ambivalence, but the real stars of this tune are her band, who inject a whole new level of life and energy into the song with some really hot instrumental work. Far From Home is a song of emotional survival sung in dulcet tones; it's introspective and self-possessed and thoroughly intriguing.

Passing Through is a plaintive tune full of self-doubt and misdirection. There's a sense that the narrator doesn't quite know where she's going but wants to get there as soon as she can, and an internal tension at this crux. It's a gorgeous melody and a fairly simple arrangement that's almost elegant in its plain state. Holding On is a musical realization, diary-style that the relationship she's in isn't what she might have hoped. The song expresses fear and excitement of a new road as well as the coming of tears at the loss. What starts out as a song of melancholy turns into one of joy. Hobson closes out with Leave The Light On, which might serve as a sort of epilogue to Holding On. It's a hedge that perhaps the newfound sense of freedom is a false one. Hobson harmonizes here, creating an enthralling sound against the backdrop her band creates.

The Erin Hobson Compact is a small town band with a sound that's anything but. Ensconced in melancholy, Americana and gentle Pop, it's as if Natalie Merchant, Lisa Loeb and Margo Timmins sat down and tried to create together. Hobson's band is first class, and her voice is a thing of beauty to behold. Talk Radio is brilliantly polished and ultimately listenable. Don't be surprised if Hobson's is a name you're very familiar with a few years from now. Get on the train now while there are still seats.

You can learn more about The Erin Hobson Compact at http://www.erinhobsoncompact.com/ or www.myspace.com/erinhobson. You can purchase Talk Radio as either a CD or Download from Amazon.com.
Posted by Wildy at 5:10 AM