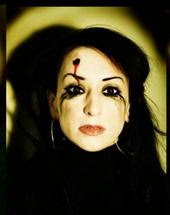 London's Delirium Tremens aren't your typical Folk Rock band. The band rocketed to prominence in December of 2007 on the MySpace Unsigned Folk Charts, pulling a surprise Christmas #1. Since then they've approached half a million plays on MySpace with nearly 14,000 subscribers. In September of 2009, Delirium Tremens released their debut full length album, Thirst in the UK. Led by the iconic voice of Karis McLarty and the complementary pipes of Nick Bovaird, Delirium Tremens makes an impression with their gothic feel and intelligent, weighty lyrics.

Karis McLarty has a great voice; deep and powerful with that air of quiet reserve that only the British can pull off. Nick Bovaird has a decent voice with an occasional whiny element ala Michael Stipe. It's not always 100% pleasant but always interesting. From a purely aesthetic standpoint I'd have to say I'd rather listen to McLarty sing than Bovaird. So how does it make sense that Delirium Tremens actually sounds better with Bovaird at the mic than McLarty? Am I nuts? (hypothetical question). I've listen to Thirst at least a dozen times now expecting that opinion to slowly fade away. If anything it's become more entrenched.

As bands go, Delirium Tremens (known as The DTs to fans) is something of a "hot mess". They're really good; very appealing and yet don't seem to have it together. There are times during Thirst when it literally sounds like they're not all on the same page. The DTs really click when they work in synch, writing dark music noir in a folk format. Songs like Geronimo, Necrophilia and Goodbye Billy, Love focus on dysfunctional relationships, highlight both appealing and appalling traits of the respective narrators and characters of each song. Necrophilia is probably McLarty's finest vocal performance on the disc. The DTs show off some great vocal harmonies on Coffee Shops & Squares, and seriously raise their game on Genius And The Holy Ghost, the most intriguing song on the disc. Bovaird takes over vocals here amidst a wide-ranging arrangement full of conflict. Bovaird hits another highlight on Half Of Me.

Songs like The Apple, The Karmen Line and Sugar just don't work out that well on CD (it might be different live). At the end of the day, the vocal mix sounds much better with Bovaird out in front and McLarty in support. As a soloist I'd rather listen to McLarty any day, but the mix just doesn't work, particularly with the tendency toward overly busy instrumentation. This is the great conflict I find as a listener. At the end of the day, McLarty might just be too forceful for the style of the band as a lead singer in spite of being the best singer of the bunch. Hence, a hot mess that in spite of any deficits is definitely intriguing.

You can learn more about Delirium Tremens at www.myspace.com/deliriumtremenssongs. Thirst has been released on iTunes, according to the band’s website, but the album does not show up upon searching, and the link provided on The DT’s MySpace page goes to an album by a Swiss hardcore band named Delirium Tremens. It’s in the process of being worked out. In the meantime you can stream their songs on the MySpace page (link above).
Posted by Wildy at 5:33 AM