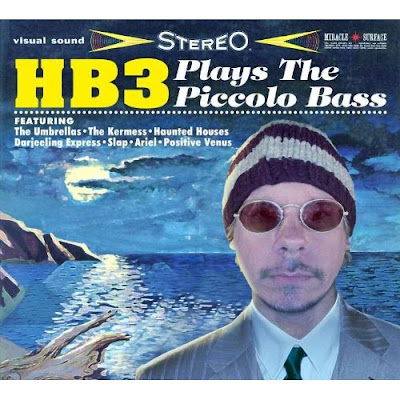 HB3 is back. It wasn't all that long ago that we reviewed The Veldt, his fine collection of songs based loosely on the Ray Bradbury story. After such an ambitious project, HB3 wanted to create something that was simply beautiful. HB3 has played The Piccolo Bass on his last two albums and decided it was time the instrument came to the fore. The Piccolo Bass is an octave above a regular bass and an octave below standard guitar tuning. The instrument was developed by Stanley Clarke and is an amazing supple and expressive instrument in the right hands. If nothing else, HB3 Plays The Piccolo Bass proves that HB3's hands are the right ones.

HB3 opens with The Umbrellas, quickly introducing influences such as The Beatles and William Ackerman. There is a pensive feel to the song that periodically boils over into intense movement before quickly subsiding. The production serves to create an atmosphere of a room with wonderful acoustics. HB3 mimics mandolin and even lute on The Kermess, a song with roots in the Breughel painting of a medieval peasant dance. The song is a slow-build energy-wise, rising from a timid start to a sense of whirling timelessness. Haunted Houses is reinterpretation of a song from The Veldt that actually plays better here than in the original form. Stripping Haunted Houses down to its most basic form brings out the simple, subtle beauty of the melody.

Darjeeling Express is a near-eleven minute musical meditation that blends the rhythm of the rails with Indian tonal structures in surprising and pleasing ways. The sense of motion is palpable, as the impending sense of arrival each time the song slows. The key here, as it was on The Veldt, is HB3's phrasing. Regardless of what instrument he wields, HB3 seems to have innate sense for how things fit together, making even the most surprising musical turns seems as natural as breathing. Slap opens as a free-form improvisational peace that quickly degenerates into some of the most delicious slap bass work this side of Bakithi Kumalo (Paul Simon). Ariel is a meditation on female beauty, built in slowly undulating lines like the curves of a body. This is a gentle listen that's good for relaxation. HB3 closes out with Positive Venus, a conglomeration of two other tracks. HB3 took Positive Violence from his album Luminosity and married it to Venus, a previously unreleased track. The result sounds the rough cut of a movie score element. There's a real sense of life to this tune that is compelling, with an incessant rhythm underlying the plodding steps of melody.

As with The Veldt, HB3 manages the expected in unexpected ways. His phrasing through HB3 Plays The Piccolo Bass is flawless. Each song has its own life and energy, cavorting more like children than songs. In the middle is HB3 with his easy smile and cool demeanor, scoring the world around us like he knows all the answers. HB3 Plays The Piccolo Bass is probably a niche album, but it’s a splendid offering that should not be overlooked.

You can learn more about HB3 at http://www.hb3.com/. You can purchase a copy of HB3 Plays The Piccolo Bass on CD from Amazon.com.
Posted by Wildy at 5:10 AM