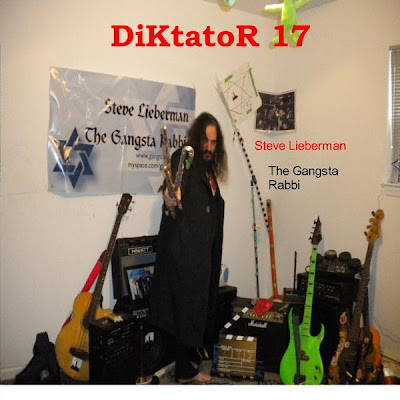 The Gangsta Rabbi is at it again, releasing his 17th CD in the last 7 years. DiKtatoR 17 is vintage Lieberman with a twist, offering up 22 tracks of Psychedelic Punk focusing on social injustice, Judaism, living with Bipolar disorder and showing a remarkably light sense of self-deprecation. Lieberman's style of bass-driven punk accented with Jethro Tull-style flute playing has won him fans and admirers throughout the New York City Indie music scene, and The Gangsta Rabbi doesn't disappoint on DiKtator 17. The same righteous indignation at the unfairness of the world is here, but behind it all, you'd almost think Lieberman has reached a point in his life where he's happy.

DiKtatoR 17 opens with Obama-Rama Yeah, a joyous celebration of the election of Barack Obama as President of the United States. Lieberman is notoriously hard to understand at times, a fact that he lampoons later on in Novelty Hit. Novelty Hit is one of three songs in which Lieberman takes gentle swipes at himself, something that hasn't been readily apparent in previous efforts. On Pay To Play Lieberman sings "If I didn't pay to play I wouldn't play anywhere at all". Lieberman also takes a playful swipe at himself in I Should Have Been A Musician. The DiKtator is an interesting track, sounding something like The Ramones playing with Wesley Willis.

Lieberman throws in a couple of unusual covers on the album as well. Waler'Ah (Happy Wanderer) is a unique take on Friedrich-Wilhelm Moller's tune that might just live in infamy. The song, originally titled The Happy Wanderer was an international phenomenon in the early 1950's, and a major Pop hit for the Obernkirchen Children's Choir. I don't know if Moller would ever have conceived of the Punk arrangement Lieberman sets it in, but I almost tend to think he wouldn't be displeased either. Lieberman also mines the Jerry Bock/Sheldon Harnick penned Fiddler On The Roof for Sunrise, Sunset in a highly entertaining turn. I Wish That I Was Hot is another surprise, an enticingly Pop/Punk missive that sounds like it could be soundtrack material for a teen comedy like American Pie. Lieberman hasn't lost his touch on social justice issues (We Have No Rights!, Terrorist, The Labourer), and displays a wicked sense of humor at times (Poopin' At Work). He even touches on his illness, singing the praises of Alprazalam and crediting it for who he is today. Perhaps the most telling moment on the album, however, is G-D Loves Me Tho' I'm Crazy. Once you get to the bottom of Lieberman's story you find a man who perhaps is finally at peace with himself; at least in that moment.

Steve Lieberman, AKA The Gangsta Rabbi is about as eclectic as they come. While he could be dismissed as a novelty, the fact of the matter is that Lieberman is a genuine street poet; speaking the vernacular of a ghetto that exists in all major cities but perhaps isn't recognized because society has colorized our views of what a ghetto is and is not. DiKtatoR 17 might be Lieberman's best work yet, if only because the humanity in his music is becoming more and more human with time.

You can learn more about Steve Lieberman at www.myspace.com/gangstarabbi or http://www.gangstarabbi.com/, where you can purchase a copy of DiKtatoR 17 or any of Lieberman's other recordings.
Posted by Wildy at 5:00 AM