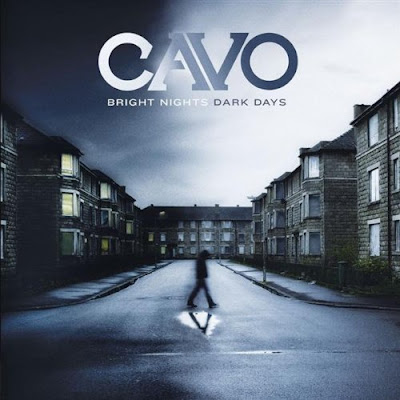 Cavo had been knocking around the St. Louis music scene since their inception in 2001, but a lineup change in 2006 catalyzed the band and their sound in ways they'd only imagined previously. What had been a fun and necessary pursuit for front man Casey Walker, guitarist Chris Hobbs and drummer Chad La Roy turned into a vibrant project with a feeling of destiny about with the addition of bass player Brian Smith. The first break came in 2007 when St. Louis radio station The Point put their song Champagne in rotation. Step two occurred at a showcase in New York City when the band was approached by producer David Bendeth (Breaking Benjamin, Paramore, Red Jumpsuit Apparatus). Bendeth wanted to work with the band regardless of whether they were with a major label. Ultimately, Cavo ended up signed with Reprise Records with Bendeth at the helm for their major label debut, Bright Nights Dark Days.

Cavo's sound is drawn together by vocalist Walker, who seems to have two distinct voices. His lower register is pleasant and nearly soothing, but in his higher register he's a classic Rock N Roll front man; a cross between Scott Stapp and Steve Perry. Cavo opens up with Champagne, the song that started this odyssey from them. It's a disciplined, guitar-oriented rocker with a lot of energy. Cavo holds in the reins on the verses and goes full-throttle on the chorus for a song certain to garner attention from major radio. Crash is a great rock tune with big hooks, an infectious chorus and a positive message, of sorts. Let It Go isn't my favorite song on the disc, but the chorus is all you could ask for in a pop/rock song.

Ghost is a potential hit. It's a gentle rocker about trying to move on after a relationship but constantly tripping over memories. Even getting rid of the artifacts doesn't work. The chorus here will inspire you to sing along and you won't be able to get it out of your head. Blame is a bit weaker on the songwriting, but the tableaux of sound they build here more than makes up for any weakness. My Little Secret is all about the ambivalence of adultery; the narrator professes his desire to be with his new love, but takes no steps to leave his old one. He knows its going to fall apart and sits there waiting for the end. Beautiful and We All Fall Down Again are decent but don't carry the same energy found on much of the album. Cavo recovers nicely on Over Again, a radio-ready Rock tune with real licensing potential. Cavo closes out with Useless; not the best choice for a closer and probably the weakest track on the disc.

Cavo has that It-factor that bands search for. Vocalist Casey Walker has a sound that's instantly recognizable, and the band displays a special kind of chemistry on Bright Nights Dark Days. If this isn't a breakout album, it will establish enough of a base for Cavo to break out on the next one. Very well done.

You can learn more about Cavo at http://www.cavomusic.com/ or www.myspace.com/cavomusic. You can purchase Bright Nights Dark Days as either a CD or Download from Amazon.com.
Posted by Wildy at 5:38 AM