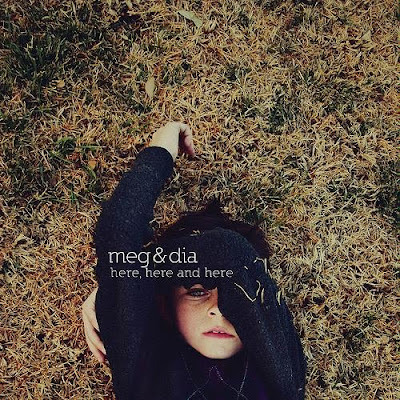 Meg (vocals/guitar) and Dia Frampton (lead vocals) are the prime movers behind Meg & Dia, a quintet with roots in Draper, Utah that's quickly on the rise. Laced with candor, charisma and wit, Meg & Dia's music has a tendency to strike deep chords with listeners. Meg & Dia spent over two years on the road in support of their debut album, Something Real, culminating in supporting roles on the Vans Warped Tour and with New Found Glory. Upon returning to the studio to record their follow-up album: Here, Here & Here; Meg & Dia found that their worldviews and perspectives had been irrevocably widened by their time on the road.

Meg & Dia get down to the basics on Here, Here & Here, a title drawn from a quote by Wolfgang Amadeus Mozart. Mozart explained that the key to composing is the head, the heart and the ear. Meg & Dia make great use of that advice starting with the opening number, Going Away. Going Away has an anthem-like feel; it's a monologue about the necessity of moving on to new phases of life when they call and the human need to bring the past with us. It's a strong track with a catchy chorus that has decent radio potential but has more of a soundtrack feel to it. Hug Me is a song about trying to overcome bad programming and finding your own way in a world full of messy emotions you don't know how to handle. Meg & Dia hit at a lot of truths here in a strong rock arrangement featuring rapid-fire lyrics. The emotional whirlwind continues on What If; addressing someone's controlling behavior in a relationship and the way it has backfired, in retrospect. The chorus on this song is pure gold.

Inside My Head sounds like it should be a soliloquy from a musical production. It represents the inner life of a victim of abuse who has escaped the physical abuse but still suffers from the mental and emotional impacts. This highly melodic tune is very well written and carries a lot of emotional weight, particularly, perhaps, for those who have lived through similar situations. Black Wedding seems like a certain hit at College Radio and beyond, mixing dark subtext with a highly catchy, unforgettable arrangement. Bored Of Your Love plays on the concept of someone who stays in a relationship for the simple fact that it's easier than leaving even though the heart and mind have already left the building.

The Last Great Star In Hollywood is not only a great Rock song but also incisive social commentary on the negative effects Hollywood has on our perceptions of beauty and matters of important. Agree To Disagree is a song about licking your wounds and waiting for the right time to respond. It's written as a feel-good hoe-down but is intractable in its strength. Meg & Dia take a rueful look back at an abusive relationship that the narrator has finally escaped; the song is a healthy expression of all that went wrong that turns into an angry and cathartic outburst. Maturity and grace temper anger until it burns over and melts through the emotional wax of healing. Kiss You Goodnight is a song of succor, protection and peace. All the turmoil that has come before leads to a moment of peace; a place where the wounded protect the wounded. There's a rough beauty here that is loosely tangible and compelling. Meg & Dia conclude with Here, Here And Here; a song about healing and the catharsis of writing and playing music. It also plays as a parable for life; reminding all who would listen that we all already possess the tools to build our lives.

I was not familiar with Meg & Dia prior to receiving Here, Here & Here in the mail, but I have to say the album is a compelling and necessary listen. Listening to Dia Frampton's voice is like waking up from a dream to realize you weren't, and the band is as compact and creative as you could ask for. The songwriting is solid at worst, and outstanding for most of the album. Meg & Dia are on tour in support of Here, Here & Here. Make certain you see them when they come to your town, and check out the album too, while you're at it. It's definitely worth all the spins you'll give it.

You can learn more about Meg & Dia at http://www.meganddia.com/ or www.myspace.com/megdia. You can purchase Here, Here & Here as either a CD or a Download from Amazon.com.
Posted by Wildy at 5:10 AM