Review: Tonight We Ride - Of The West 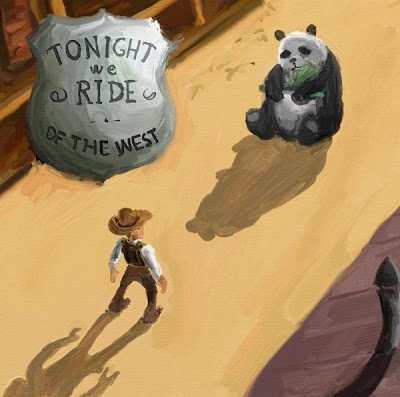 Small markets sometimes hold big surprises, musically. So it is with Helena, Montana and Tonight We Ride. Originally a collaboration of Dustin "Dub" Campbell (guitars, vox) and Greg Vivrette (bass, backing vox), the duo became a post-Punk power trio with the addition of drummer Adam McDonald after gigging for a while and realizing they needed a solid core to keep their sound developing. Tonight We Ride write about three subjects: Friends, drinking and the prophesied the end of the world in 2012. These are the building blocks of Tonight We Ride's debut album, Of The West.

Of The West opens with Cain Station, an energetic number about friendships and personal connections. It's a strong opener with a distinct Lo-Fi feel that works for Tonight We Ride. Duke Of New York A#1 was inspired by the Isaac Hayes character from Escape From New York but parodies the life and times of Amy Winehouse. It's a mid-tempo song with a dark feel; humorous yet respectful at the same time. Drink Myself Into Oblivion is just what it sounds like; a fun drinking song that pulls absolutely no punches. The language is a bit gratuitous (as it is throughout much of the album), but the effect is entertaining. Prelude To Hell On Earth takes on the upcoming annihilation of existence in 2012 in a funky instrumental that's among the finest playing on Of The West. Vivrette makes his bass get up and walk around the room while Campbell riffs off of the magic he creates.

The Other Side Of The Wall marks a real change of pace for Tonight We Ride, with an all-acoustic number that sounds more singer-songwriter than Post-Punk acoustica. The edges are rough, but the core is excellent. Heaven Can Wait finds Tonight We Ride taking listeners on a honky-tonk romp in a ferociously brief bit of fun. For Richie Rowe opens with a guitar progression that sounds like it wants to turn into Queen's Crazy Little Thing Called Love before Vivrette's walking bass line carries the band off on a highly energetic Acoustic Punk romp. It's a song about living in the moment, sucking the marrow out of life and all that. Parker's Got A Brand New Bag keeps the energy high with a more Pop oriented yet Lo-Fi gem, leading into the closer, Cash Money. Cash Money is a decent tune, but seems a bit out of place on Of The West, particularly so as a closing tune.

Tonight We Ride manages to bring a live feel to Of The West; I can only imagine how much a live show with these guys would be. Some will chafe at the gratuitous language, but one gets the sense this isn't so much pose as prose. In spite of the rough edges, there's real pop sensibility running through the veins of Tonight We Ridge. The songs on Of The West (most of them) could be played as Pop tunes (although part of what makes them work is the "in your face" approach of the band. Make sure you get to know Tonight We Ride. They're better than I expected.

You can learn more about Tonight We Ride at http://www.tonightweride.net/ or www.myspace.com/twrmt. You can purchase Of The West on CD from CDBaby.com, or as a Download from Amazon.com.
Posted by Wildy at 5:00 AM