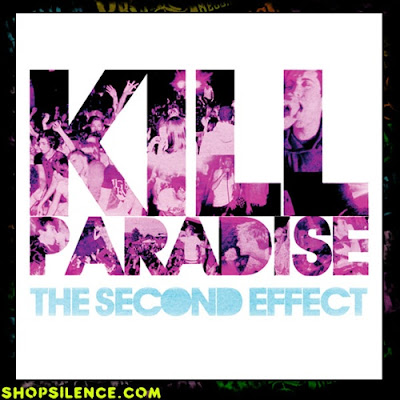 Denver, Colorado's Kill Paradise has generated pretty significant buzz online, with over nine million plays on MySpace alone. The Electropop duo features Nick Cocozzella and Bryce Hoops, and a sound that got them signed to BreakSilence Records (and may have had a hand in getting Breathe Carolina signed to Rise Records as well). Kill Paradise's debut album, The Second Effect was released exclusively through Hot Topic stores in November of 2009. The songs have been or will be featured in MTV series' "True Life: I'm Coming Home From Iraq" and Paris Hilton's My New BFF.

The Second Effect is good as long as you know what you're getting yourself into. Sugary dance pop with catchy hooks, overproduced and electronically sanitized vocals and a young, simplistic writing style are the order of the day. Cocozzella and Hoops may well have great voices, but there's no way to know as both are so altered it's hard to know what's live and what's vocoder. The opening track, Oh Lexi, is a catchy number with a solid dance beat that won't crowd the National Poetry Award field with lines like "Oh Lexi, you're just so sexy won't you take me away / Oh baby, oh Lexi, you're just the way I wanted you". It's not substantive or even necessarily particularly good, but it's just the sort of ear candy that dances its way to the top of the pop charts. Fall From A Star is built around an interesting keyboard riff that mutates from key to key and runs through much of the song. It's pure Dance/Pop that makes you want to move.

Just Friends? sounds like a junior high lunchroom discussion set to music, complete with cheesy Casio-style synth work and a slick dance beat. The vocals haven't improved thus far, still buried in sickly sweet electronic effects that render the original voices practically unrecognizable. Punch! and Miracle follow a similar catchy-yet-mundane path before Breathe Carolina sits in on All For You. This tune has a bit more oomph to it than anything that's come before, although that may just be an accident of the Rock beat laid down by the programmer. The first real musical sidebar of the album is Katie & I. The style hasn't changed much, but the electronics have mostly gone away. Acoustic piano is the base instrument, and the vocals sound relatively untouched. The voices are decent enough, although the vocal effects seem to creep back in as the song progresses. Radio Arcade finds Kill Paradise returning to their electronic forte, ripping off a mid-tempo ballad over a lively dance beat. The duo closes out with Candyland Wedding, set to a Hip-Hop beat and a sparse electronic arrangement.

Kill Paradise is a band for fans of Boy Band Bubblegum Pop. The Second Effect is fairly representative of the genre, not offering much that's original or intriguing in the mix. In all likelihood, the combination of exposure, placement and the catchy nature of the tunes will yield a lot of commercial success for The Second Effect, but this is the sort of music that once it disappears from the radio it also tends to disappear from consciousness. The lyrics are less than impressive and the music is simplistic, but Kill Paradise captures the sound du jour perfectly.

You can learn more about Kill Paradise at www.myspace.com/killparadise. You can order a copy of The Second Effect directly from BreakSilence Records or by stopping by any Hot Topic store. The album is also available as a download through iTunes.
Posted by Wildy at 4:55 AM

this really makes me mad. kill paradise is challenging the ideas of modern pop. hence the funking name. anyone who downgrades the substance of nick is jealous that this will make money. do your history on nick cocozzella and you will find out that he is a college graduate in art and critical analysis. this just happens to be one of 6 projects he has. listen to radio arcade again and drop your bias bull shit. if you only knew how archived he is as a composer you would feel bad for a bias review. god this makes me so man

"Do your history" on Beethoven and Charlie Parker. Then you can come back and talk about archives.. man. They studied music.

It will not work in fact, that is exactly what I think.