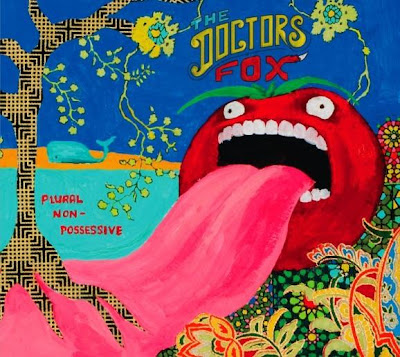 Every so often a band comes along that's so totally marching to their own drummer they are tough to classify. In this case the drummer is Josh Kiggans, and the band is Boston's The Doctors Fox. Blending Rock, Jazz, Funk, Ska, Doo Wop and Klezmer into a thoroughly novel yet comfortable is the specialty of The Doctors Fox, who claim such diverse acts as They Might Be Giants, The Band and Of Montreal as influences. Their debut album, Plural Non-Possessive, finds The Doctors Fox pulling out the musical kitchen sink and creating a delirious brand of musical magic.

Plural Non-Possessive opens with Olympic Sculpture Park in an unlikely pairing of the Gypsy Jazz style of Django Reinhart and Joe Venuti with the Be-Bop feel of Brian Setzer. The Doctors Fox waste no time creating an impression either, whacking you across the ears with the violin that plays such an essential part of their town from the opening notes. Olympic Sculpture Park is an excellent introduction to both the album and the band. The Doctors Fox bring the funk on The Man, a working class anthem that's universal in times like these. On Chemistry, the band explores the human tendency to look for a quick fix through quick fixes, if you will. It's not my favorite arrangement on the album, but is lyrically apt and has a natural flow that works in its favor.

Don Juan is a smooth ballad with great vocal harmonies that takes sudden turns from time to time to create tension and interest. The Doctors Fox get quasi-comical on Autobiography Of A Beached Whale. The arrangement includes horns, a funk-infused bass line from David Ladon and a quasi-Reggae beat. Fourth Of July works as a passive call for resolution representative of a generation that continually waits for someone to please do something. The song is well-written and arranged and is as pointed an indictment of the power structure as it is of those of who little but complain about it.

Plural Non-Possessive is full of strong songs, but the highlight of highlights is Ode To The Sun, a delicious bit of Gypsy/Funk/Rock that's highly danceable and intriguing. Sacha is a highly variable rock tune that sounds like it could have been drawn from a Chicago Transit Authority recording session. It's a highly enjoyable tune and something of a different flavor for the band. The Doctors Fox closes out with Whole Foods, a musical riff on the store/chain familiar primarily to those who live in large metropolitan centers like Boston, New York and L.A. At times the song sounds like an ode, but it also points out some of the darker aspects of the whole foods movement and store in general. It's a great arrangement and socially conscious in politically and socially dangerous fashion.

The Doctors Fox are too talented to remain just a Boston band for long. Their sound is so eclectic and original it's bound to gain them more attention and a larger stage, and the songwriting and musicianship are more than sufficient to sustain them when they get there. Vocalists David Ladon and Jon Dashkoff create some pretty impressive harmonies, and Ryan Aylward provides a master class in non-traditional fiddle playing. Plural Non-Possessive is brilliant, and will leave you longing for more.

You can learn more about The Doctors Fox at http://www.thedoctorsfox.com/. You can purchase a copy of Plural Non-Possessive as either a CD or Download from CDBaby.com.
Posted by Wildy at 5:10 AM

Labels: Brian Setzer, Chicago, Django Reinhart, Joe Venuti, Of Montreal, The Band, They Might Be Giants