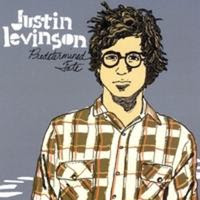 Burlington, Vermont's Justin Levinson returned home after five years in Boston, finding the laid back Burlington music scene provided him with a great space to write. Levinson has name recognition on the College Radio circuit and has even had a song featured on Virgin-America's In-Flight play list. Levinson writes in the crowded Americana realm, capturing a sound that's part Blue Rodeo, part Wilco and part Connor Oberst. Levinson's third album, Predetermined Fate was self-released in 2009.

Predetermined Fate is one of those albums you get to the end of and realize you liked it even if it initially only made a quiet impression on you. Levinson's easy, unthreatening approach washes over listeners without fully engaging them. He's a decent writer with a voice I'm non-committal on, but does seem to have a real ear for melody. The album opens with Everything About You, a decent starter but not perhaps what you'd hope for in an introduction. Things get better on the eloquent Bandaid On A Bullet Wound; a highly tuneful Americana sidebar very much worth hearing. Losing You To Tennessee is the real deal, a song that in the right hands would be a likely radio hit. Levinson even shows off some fancy country guitar work on Hopelessness.

Groundhog Day captures a melancholic, laid-back vibe that fits perfectly with the theme of being in a rut. Levinson gets a bit cliché on Waiting For Someone To Love Me, a well-written tune that somehow ends up sounding vaguely like a 1980's television commercial. Keep Your Heart Fulfilled vies with Losing You To Tennessee for the best song on the disc. It certainly has the prettiest melody and seems like the most likely song here to be licensed. Levinson closes out with Sleep Child, a dark and occasionally lyrically awkward lullaby written more for adults than children. The arrangement is gorgeous.

Justin Levinson has a talent for melody and graceful Americana arrangements. Predetermined Fate is full of songs with a lot of potential, but often the energy wanes a bit too much. His voice will strike some well and other not so much; individual listeners will have to decide for themselves. There is some real writing talent here, but the focus at times is quite varied and occasionally even distracted. There's something that runs through Predetermined Fate however that speaks of future growth. I suspect the next album will be even better; but watch out, this one will grow on you.

You can learn more about Justin Levinson at http://www.justinlevinson.com/. You can purchase Predetermined Fate as either a CD or Download from CDBaby.com.
Posted by Wildy at 5:28 AM