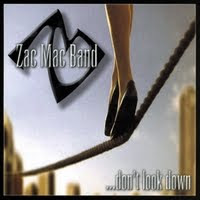 Boston-based quartet the Zac Mac Band knows a thing or two about stature. Maine-born lead vocalist Zac McIntyre towers over audiences at 6'10", wowing concertgoers with not only his size but his musical talent. The Zac Mac Band has been giving Beantown audiences their fill of ambient pop for the last couple of years. In 2008, Zac Mac Band released their debut EP, Under The Radar to positive reviews. For 2009, the Zac Mac Band looks to expand on it with the full-length Don't Look Down, which includes tracks from the EP plus six brand new tunes.

The first thing I noticed about Don't Look Down is that Zac Mac Band has pulled even more inward on their sound. The search for an Ambient Pop/Rock feel has run so deep that Zac Mac Band has nearly divorced themselves from the energy that made their sound work on Under The Radar. The tracks that appear both there and on Don't Look Down have been smoothed and glossed over since their original recordings to a point where they seem to lose their drive. MySpace Heartbreak and 15 Songs On The Radio are the most obvious examples; both songs were mellow but had this core of fun energy that lit them up like a Jack O' Lantern for listeners. Both songs in their current form are so polished and clean they've lost their essential liveliness.

Highest Level opens the album on a pleasantly mild pop note. It's a moderate opening that's fairly consistent with what's to come. Roll Me Over sticks with the mellow pop sound but comes to alive on the guitar solo. Ultimately, that guitar solo is the biggest sign of life on the disc. Stepping Stone is a decent melody that goes on too long given the overall energy level. Perhaps the best track on the disc is Darcie, a sweet love song that rests neatly in the womb of mellow Pop but exudes passion. Don't Look Down closes out with Trap; one of the better melodies on the disc that still suffers from a lack of real conviction.

The verdict on Don't Look Down is that it's ultimately pleasant but monochromatic and without a lot of life. There's absolutely nothing in the world wrong with ambient pop; groups like Coldplay and Radiohead have made big careers from different sides of the same virtual coin. The difference with those bands is the energy level and conviction that comes through the music. Zac Mac Band has the sound down, but they haven't figured out a way to channel real personality through the songs on CD. It might be a different experience in a live setting, but that energy just doesn't emerge on Don't Look Down.

You can learn more about the Zac Mac Band at http://www.zacmacband.com/ or www.myspace.com/zacmacband. You can purchase a copy of Don’t Look Down from CDBaby.com.
Posted by Wildy at 5:00 AM