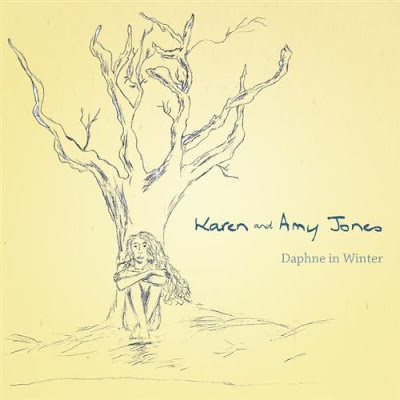 Sisters Karen And Amy Jones sound like a cross between Anne And Nancy Wilson of Heart and The Indigo Girls. Eschewing traditional folk music, the Philadelphia sisters create highly artistic acoustic Rock music that note only appeals musically but also makes listeners think. Playing together since 2006, Karen And Amy Jones have already been featured on four national compilations, and have received airplay on stations such as Delaware's WSTW and Philadelphia's WXPN. The duo released their debut album, Daphne In Winter in July of 2009 and are planning an East Coast US tour in support.

Daphne In Winter opens with Right Turn, perhaps one of the most stylistic and refined kiss off Pop/Rock songs of 2009. Right Turn focuses on a woman finding herself in the midst of the life she'd fallen into. It's a song of empowerment and is rendered eloquently beautiful by the mesmerizing voices of Karen and Amy Jones. Strange Lullaby is incredibly lush, sounding like something that might come out of a Sarah McLachlan session. The vocal harmonies are angelic. The Jones' get a bit more attitude on Ride, exploring the excitement of a relationship with a "bad boy". The funky arrangement is a great listen, and the vocal harmonies are, as always, exquisite. Brittle Creatures introduces a much darker tone in a bleak but compelling musical arrangement where the vocal line is almost in conflict with its surroundings. This is perhaps meant to be symbolic and borders on disturbing but is highly compelling.

The Years find Karen And Amy Jones moving more firmly into the Rock realm with a gentle tune that shows off their voices but seems a bit flat energy-wise. They recover nicely on The Things That He Breaks, an emotionally charged and powerful musical stand that's going to strike chords with anyone who's ever been a victim of domestic violence or abuse (physically or otherwise). The melody here is highly memorable, particularly in the chorus, and the harmonies as good as they've been throughout the album. The Jones' close out with Winter Boy, a mellow Folk-Rocker worth sticking around for. The focus here is the intertwining of the sisters' voices, creating an ethereal and temperate vocal tableau.

Karen And Amy Jones obviously have a bond that most artists never achieve, and they use it in full measure on Daphne In Winter. Not everything works here, but the harmonies are consistently far beyond the norm. The songwriting in general is quite strong, although there is a bit of a fall-off on the second half of the CD. Even the less exceptional material sounds brilliant when both sisters are singing. If Karen And Amy Jones come to a town near you, make sure to check out the show. In the meantime, put Daphne In Winter on your list of CDs to check out.

You can learn more about Karen And Amy Jones at http://www.karenandamyrock.com/ or www.myspace.com/karenandamyrock. You can purchase Daphne In Winter directly from the band on CD. Downloads are available through most major download sites, including Amazon.com and iTunes.