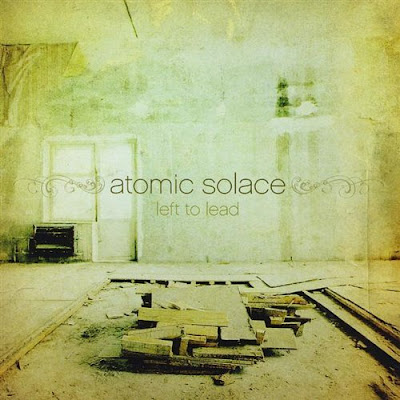 Central Kentucky is the place for Atomic Solace. What started out as a jam session among four bored friends has turned into juggernaut. Atomic Solace (formerly named Solace) has built quite a buzz in the past year or so, culminating in a lights out performance at SXSW 2009. The band continues to tour in support of their 2008 debut album, Left To Lead, while beginning the writing process a new project. Joe Ryan lends his impassioned vocals to the instrumental core of Kyle Moon (bass, vox); Brandon Coots (guitar, vox) and Ben Williamson (drums), dialing up the creative and musical tension to eleven.

Left To Lead opens with Over You, revealing an unusual and intriguing sound that seems to combine the Southwestern rock of The Refreshments and the Americana smooth of Blue Rodeo or even Wilco. Atomic Solace isn’t your typical Americana/Rock band, winning over listeners here with a subtly catchy tune that will stick with you. Summer Breeze continues the display of strong songwriting on a thoroughly enjoyable transition to the Latin Lounge-cum-Rock N Roll of Devil In Disguise. I really like the writing choices these guys are making thus far, and the execution is spot-on. Brandon Coots' guitar work is especially enjoyable. Atomic Solace hits a bump on Hold On, a fairly stereotypical rock ballad that finds the band losing their energy just a tad, but they rebound nicely on Left Behind. This might just be Ryan's perfect song as a vocalist, and the band rises up for their best all-around performance on the disc.

Oh, if they'd only stopped there. Don't get me wrong, there's nothing really wrong with the rest of the disc; the songs are decent and listenable, but won't light up radio dials or listener's ears to any great measure. Just Believe is a heartfelt love song, and Demon has some great vocal harmony work going on, but the songs in between just don't register much energy or interest from the band. Perhaps that's not the way it played out in the studio, but on CD it sounds like they lost direction. Atomic Solace rebounds a bit on the catchy West Coast, but it's just not up to the level that Atomic Solace established over the first six songs.

Left To Lead isn't a bad album by any measure, but it is a study in contrasts. Atomic Solace blows in like a lion and goes out like a lamb, nearly sounding like two difference bands in the process. This is one of those occasions when an EP might have been the right first step instead of pushing for enough songs to complete a full-length album. Either way, however, Atomic Solace establishes themselves as a band capable of big things on Left To Lead. They should definitely be on your radar.

You can learn more about Atomic Solace at www.myspace.com/atomicsolace or http://www.solacemusic.net/. You can purchase a copy of Left To Lead from CDBaby.com.
Posted by Wildy at 5:00 AM