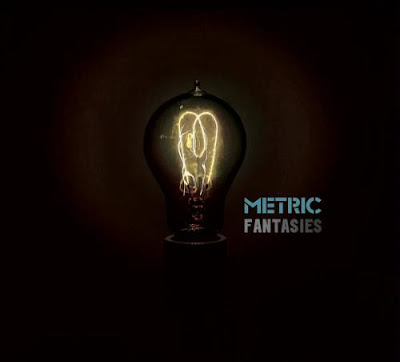 Metric is a band born in Toronto with roots all over the North American continent. Frontwoman Emily Haines (also lead singer of Soft Skeleton), guitarist Jimmy Shaw, bassist Joshua Winstead and drummer Joules Scott-Key took a hiatus in 2006 after three years of continuous touring and recording. The band had become so inured in road life they felt disconnected from their own humanity. Each member went on to other projects but all found their way back to Metric. Rather than writing and recording an album in less than three months as in the past, Metric let Fantasies fulminate over the course of eighteen months, coming together in the woods outside Seattle to pull it all together and find a cohesive core. A sound emerged that is both surprising and not at all unexpected. The time away has done them all well, and Metric returns with their best effort yet.

Fantasies opens with Help, I'm Alive, with its incessant message "beating like a hammer". Reminiscent of Belly or even The Breeders, Metric manages the sort of infectiously catchy-yet-vaguely-annoying Pop/Rock song that tends to do well on commercial radio. Sick Muse is highly danceable Pop/Rock. This is a licensable tune with a great hook and a compact arrangement. Satellite Mind is one of those songs I struggle with as a reviewer. I don't like it, then I do; it keeps changing. Ultimately, it's a driven and intriguing song about desire and need with a dash of voyeuristic intent. Twilight Galaxy will hit home with most that have pursued music or one of the other arts as a career. The song chronicles the struggle between chasing dreams and taking the "responsible path" often advocated by parents. The friction that comes into such situations is clear, but Metric encourages those on the path to their Muse to keep going.

Gold Guns Girls is a high energy bit of repressed New Wave/Punk in acoustic form. The song hits on the addictive nature of acquiring worldly goods and how what can be eclipsed by concerns over how much. Metric steps fully out of the box with Collect Call, a rhythm-oriented Ambient Pop/Rock tune. The songwriting here is stark and painted with a lush brush, if you will. I could hear this ending up on a soundtrack somewhere. The last three tracks reflect something of a slide; Front Row and Blindness are both decent but don't show the same sort of focus seen on the rest of the disc. Stadium Love takes a sharp left-turn into cheesy-pop in a "one of these things is not like the other" moment.

Metric's Fantasies is varied and wide-ranging, working more often than not. This is one of those albums that is musically strong and affable but promises more impact than it delivers. Fantasies dances across the intrigue line a few times, but gets caught up in different points of focus and ends up a bit scattered; worth some time but probably not an A-list pick.

You can learn more about Metric at http://www.ilovemetric.com/ or www.myspace.com/metricband. You can purchase a copy of Fantasies as either a CD or Download from Amazon.com.
Posted by Wildy at 5:00 AM