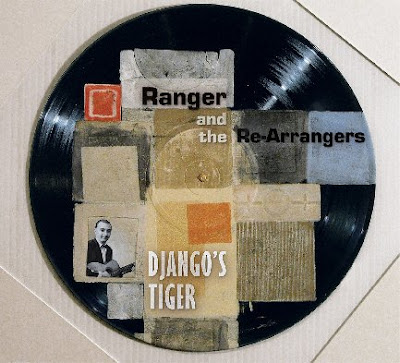 Ranger Sciacca was bitten by the violin bug early on, studying predominantly classical music and fiddle tunes until a chance encounter introduced him to the music of folks like Stephane Grappelli, Joe Venuti and Stuff Smith. Together with his father Michael, Ranger began to play out and build a repertoire of songs that included some originals. Ranger & The Arrangers has become on of the most notable purveyors of Gypsy Jazz in the Northwest US. Their debut album, Django's Tiger, makes that point abundantly clear.

Opening with the title track, Ranger And The Re-Arrangers deliver guitar work so sharp it cuts in an ensemble as tight as piano wire. The marriage of violin and guitar here is exquisite. Doin' The Uptown Lowdown is delivered in perfect period presentation. The song is exciting and highly danceable. Tin Rain features the delicious interplay of guitar and violin in what might be the best performance on the album! Hello, Dolly! is presented in respectful fashion, neither adding to nor detracting from the original. Nao Me Toques introduces a Spanish guitar style that is quite thrilling, and the guitar and violin here cavort across the staves in magical synchrony.

There are so many highlights here it's hard to hit them all. Ma Premiere Guitare and Lulu Swing are top notch, and Minor Swing will have you reaching for a dance partner. The one-two punch of Pulse and Coucou, however, is sublime. Ranger And The Re-Arrangers continue on with the violin acrobatics of Beatrice before closing out with All Of Me, Blue Drag and the classic I'll See You In My Dreams.

Ranger And The Re-Arrangers drop in with one of the best Jazz recordings of the year. Django's Tiger takes us on a tour through Gypsy Jazz and all the side roads that lead to that wonderful musical patois. Make sure you spend some time with Django's Tiger. This album is worth the effort.
Rating: 4.5 Stars (Out of 5)

You can learn more about Ranger And The Rearrangers at http://www.rangerswings.com/ or www.myspace.com/rangerandtherearrangers. You can purchase a copy of Django’s Tiger from CDBaby.com.
Posted by Wildy at 5:20 AM