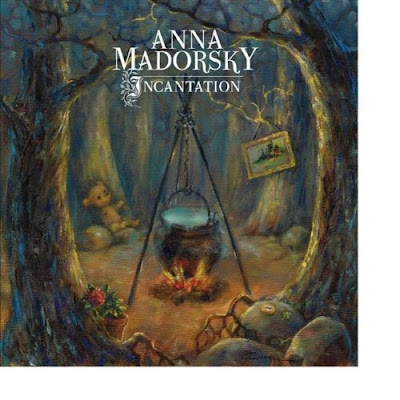 Anna Madorsky – Incantation
2009, Anna Madorsky/ASCAP
St. Petersburg, Russia-born L.A. singer/songwriter Anna Madorsky has been down this path before. Her 2008 Indie debut, Talk Is Cheap was recorded under the name Rouse. Madorsky dropped the stage name and returned to her roots for her follow-up album, Incantation. Written in the vein of 4AD meets Kate Bush, Madorsky digs into metaphysical arguments and subjects of personal and social equality on Incantation, seeking answers in musical parables.

Incantation opens with the lilting anthem Bloom. Madorsky sounds a bit like Kate Bush, with similar vibrato and a vocal aloofness that's distinctive. Madorsky doesn't have the prettiest of voices but it's very memorable. Broken Artifacts wants to be a bluesy song but Madorsky gets a bit too caught up in her own sound. The vocalizations within the song become bland and repetitive, sapping the song of any real compelling nature. Things start to pick up a bit six tracks in with Emerald City. The song is a bit bland but the chorus is memorable and the overall arrangement is decent. Therapist's Office has the first real urgent feel on the album. It's not the best overall composition but might be the most interesting one.

Guillotine is a piano-based opus ala Tori Amos with a jazzy vocal line. The phrasing is a bit awkward at times but overall the song is quite well done. Rhea is edgy and disturbing, repetitive yet intriguing. It's perhaps the most bizarre song on Incantation; I can't say I like it entirely but it's probably the song I listened to the most. Madorsky runs through a couple of bland tunes in Sandbox and Clinic before closing out with Soundbyte, the best bit of songwriting on the album. It's an interesting look at personal chaos and its coexistent compatibility and incompatibility with living in an information-based society. The arrangement is intriguing and Madorsky is in her best voice right here.

Incantation was a very up-and-down listening experience. Many of the songs mentioned here have real merit, but several tracks were simply there; experiences to get through to get to the good stuff. This may be one of those albums where the existence of downloads that allow you to select only the songs you want is a good thing. When Madorsky connects she's quite a pleasure to listen to. When she falls short in a recording it can be a long listen. The balance sheet is pretty even on Incantation. Listeners might go either way.

You can learn more about Anna Madorsky at www.myspace.com/annamadorsky. You can purchase Incantation as either a CD or Download from Amazon.com.
Posted by Wildy at 5:10 AM