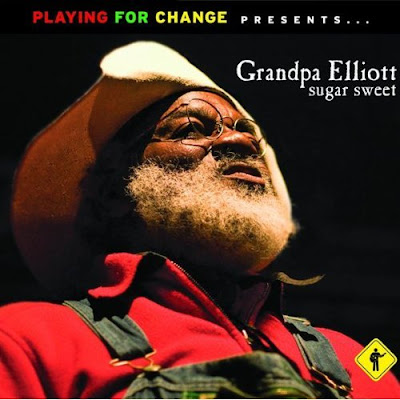 Grandpa Elliott Small came into the national spotlight as part of the Playing For Change project. He was one of the vocalists in the project's version of Stand By Me, which has been viewed over 15 Million times on YouTube. Grandpa Elliott is a New Orleans street musician who has been playing on Jackson Square and the French Quarter's Royal Street since the 1960's. He is a local icon who at the age of 64 played for the first time in front of a crowd of 40,000 at L.A.'s Dodger Stadium. His profile has been further raised by appearances on The Tonight Show and The Colbert Report. In November of 2009, Grandpa Elliott released his full-length debut album, Sugar Sweet, on Playing For Change Records.

Part of what makes Grandpa Elliott's music work is the blend of sounds. Take the sounds of Africa, the Caribbean and New Orleans, mix them up, and add in the salty, warm voice of the man himself and you get something a bit like magic. Grandpa Elliott opens with Ain't Nothing You Can Do, a song about the inevitability of heartbreak. It's a universal song with its roots in the Blues even though it's not a Blues tune. This Little Light Of Mine (Medley) is done in a superb arrangement incorporating a Gospel Choir and touches of Dixieland sound. It's a great listen and one of the highlights of the album. Sugar Is Sweet sounds like something that might have come out of an early R&B recording session; the song is a bit cliché but well-intended and well executed. Grandpa Elliott gently nudges aside the likes of BB King on Baby, What Do You Want Me To Do. The guitar work and vocal line here are exceptional, and Elliott could take a seat with the greats of Blues without feeling a bit out of place after this performance.

Share You Love With Me goes for the old school Rockin' R&B in a stylistic and memorable performance. Up next is a cover of Cat Stevens' Another Saturday Night. The song as presented is decent, done up with a gospel choir on backing vocals, but seems to take Grandpa Elliott away from his core sound. Fannie Mae is presented in a live recording that shows the sort of panache developed from five decades playing on the streets of New Orleans. Rockin’ Rhythm N Blues is the medium, and Grandpa Elliott absolutely owns the crowd. Sugar Sweet goes out on a high note, with a cover of Charles Brown's Please Come Home For Christmas. The song was first recorded by Brown in 1960, charting several times over the next dozen years, culminating in a #1 single in 1972. Numerous artists have recorded this one over the years, including top-10 singles from The Eagles and Bon Jovi. Grandpa Elliott brings the tune back to its piano-based Blues roots. Don't be surprised if Grandpa Elliott takes this old number up the charts one more time.

Sugar Sweet is certainly a treat. Grandpa Elliott just keeps doing what he's been doing all his life, playing great music. The big difference now is the size of the audience. In one sense, there are performers like Grandpa Elliott all over the world. Street musicians and small-time performers with a world of talent and pizzazz just waiting for that break that (for most) never comes along. In Grandpa Elliott's case, it finally came along in his seventh decade. But in another sense, there's no one quite like him. Sugar Sweet might not always have the best material for Elliott to play and sing, but he makes the most of every song. It's a strong effort, and worth spending some time on.

You can learn more about Grandpa Elliott on the Playing For Change website. You can purchase Sugar Sweet directly from Concord Music Group as either a CD or Download.
Posted by Wildy at 5:10 AM

I suppose everyone must browse on this.