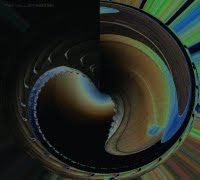 Dallas, Texas singer/songwriter Tim Miller combines the sort of glorious voice and hard won musicianship that causes strangers to stop and listen. He came to our attention here at Wildy's World last year through his fine sophomore album, Adelaide. A member of the teeming horde of Acoustic Folk/Rock singer/songwriters, Miller rises quickly to the top because of his songwriting and voice. Turn to 2009, and Miller has a new song that needs to see the light of day. Rather than just publish a one-off single, Miller adds a Cat Stevens cover and acoustic re-interpretations of three songs from Adelaide. Sessions Lamar simply serves to remind us why we liked Miller so much in the first place.

Miller opens with the new track, Opposite Ways, a song about the inevitability of a relationship on the wane. It's a mature look at a love that's just not going to work, imploring the other person to see things for what they are. The melody is one that gets inside your head and bounces around for days. The music itself is ingenious, with Miller even creating juxtaposition between the bowed bass and keys that underscores the theme of the song. As always, Tim Miller has an amazing voice that's full of heart and soul. Up next is a cover of Cat Stevens' Father And Son, a timeless tune about the eternal conflict between an older generation looking to settle down and a younger generation looking to break out of the mold. Miller's version is touching and full of the full of the emotional conflict that Stevens first captured back in 1970.

Say Hello captures the fear and angst and excitement that can accompany new love or the renewal of old love. Miller's heart is fully on his sleeve here, with a moving vocal line that makes it sound like he's living it as he sings. The Point documents an intervention with a loved one drowning in addiction to alcohol. It's an unusually personal and poignant song with a powerful message. Anyone who's ever been or loved a friend of Bill is likely to be moved by The Point. Miller closes out with Man Overboard, an allegorical tune about personal destiny and relationships and how they don't always point in the same directions. Man Overboard is about putting those dreams first and inviting those who really care to come along. It's a powerful tune that gains a lot being stripped down to its simplest form.

Tim Miller does it again with Sessions Lamar, offering a great new tune, a powerful cover and enlightening new takes on three of his older songs. The only complaint is that it’s an EP and not a full-length release. With licensing arrangements in place with numerous shows across several networks, don't be surprised if you hear more and more from Tim Miller this year. In the meantime, pick up Sessions Lamar. It's very much worth the time and money!

You can learn more about Tim Miller at http://www.timmiller.com/ or www.myspace.com/timmiller. You can purchase a copy of Sessions Lamar at The Connexxion (Tim Miller’s online store), or you can download the EP from iTunes.
Posted by Wildy at 6:02 AM