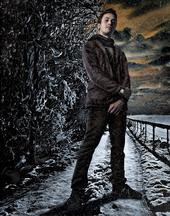 Braxton Parker is a singer/songwriter based out of Philadelphia, PA with a hard-nosed DIY work ethic and an extensive touring schedule. His sound can best be described as Pop Rock with elements of Classic Arena Rock and British New Wave blended in. Parker has a distinct ear for melody and an ability to craft tunes that inspire listeners to sing along. Parker's debut EP, CD Preview, was produced by Ted Comerford (Army Of Me, Virginia Coalition, Zox) with help from Paul David Hager (Avril Lavigne, American Hi-Fi, Butch Walker), and deserves the sort of big-time attention and push that only a major label's marketing arm can produced.

The three-track EP opens with City Lights, a highly-catchy Rock tune with a 1980's British Rock/Pop feel. Big hooks and a soaring chorus make this a winner all-around. City Lights could be a breakout hit with the right push. Parker goes for a tuneful melancholia on Everything Changes before breaking into a progressive Arena Rock sound on Not Yet. This is the sort of song that becomes a fan favorite even if it never makes waves as a single.

Braxton Parker does Rock N Roll with a deft Pop feel. His CD Preview is very promising, leaving us waiting anxiously for whatever comes up next. Make certain to catch up with Braxton Parker; something's cooking.

You can learn more about Braxton Parker at www.myspace.com/braxtonparker. CD Preview is a sampler sent out to drum up interest in the full length album to follow. Keep checking Parker’s MySpace page for release information!
Posted by Wildy at 5:00 AM