Review: Adam Ilami - All The Things You Want 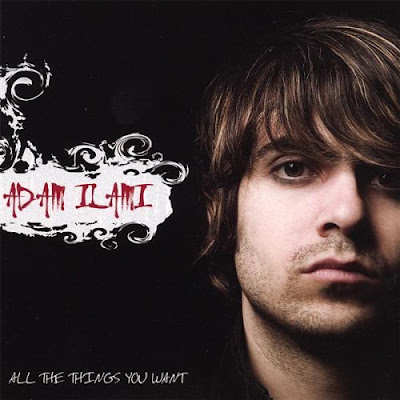 Adam Ilami - All The Things You Want
2007, Texas is Bestas Music

Adam Ilami was always a wunderkind, teaching himself to play guitar, drums and piano by the time he was fourteen years old. The Arlington, Texas born-and-raised singer/songwriter made his way to Nashville, where he found his footing and his calling in self-made Rock N Roll. Ilami writes catchy, hook-laden Pop Rock with cajones a personal touch. His debut album, All The Things You Want, was released in 2007 to a sold out crowd at The End in Nashville, Tennessee. The songs therein will make you dance, sing along and remember what Rock N Roll has always been about.

Ilami opens with Independent Nation, driven by a funk-filled bass line and guitar work that's reminiscent of Lenny Kravitz before blowing out into an energetic radio-friendly rock tune. Ilami has an affable voice, and the pacing of the song makes for memorable listening. It's one of those tunes that if you just heard it on the radio you'd call the station to find out who it was. On The Inside tackles the growing pains that go with growing up and moving out into an uncertain world. Ilami is encouraging those listen to blaze trails rather than live in fear. This is done to a funk-filled arrangement that's absolute ear candy. All The Things You Want opens with a big guitar presence before dropping into a sparse chorus that highlights a pleasant and mildly memorable vocal line. The song deals with watching someone you know blossom while knowing they are untouchable. The concept here is universal as most everyone has had this experience with one of their friends in high school, college or elsewhere.

Hangman is a romantic ballad of hopeless/hopeful variety. The sentiment is sweet, and it's the sort of song that is likely to end up on a lot of mix tapes. The arrangement isn't atypical of the ballad genre, but it's a nice entry. Ilami finds his edge on My Bittersweet Poison, rocking out about a love that's no good for him but inescapable. The guitar work here is particularly intriguing, as Ilami creates a high-energy arrangement around a dark and needful yet catchy melody line. Ilami closes out with raucous rocker The Night The Two Of Us Died, featuring a straight up chorus that explodes into a crunchy chorus that gets stuck in your noggin. It's hard to pick one highlight from the album, but if pushed, I'd say The Night The Two Of Us Died is it.

Adam Ilami has an ear for big hooks and memorable melodies and a feel for Rock N Roll. All The Things You Want is the sort of debut that should make Ilami a household name. Perhaps now that he's in L.A. he'll get the attention he deserves from the Rock Establishment. The last time I heard a rocker come along with this splendid mix of brawny rock attitude, heart and pop sensibility he did quite well for himself. His name was Billy Squier.

You can learn more about Adam Ilami at http://www.adamilami.com/ or www.myspace.com/adamilami. You can purchase a copy of All The Things You Want as either a CD or Download from CDBaby.com.
Posted by Wildy at 5:10 AM