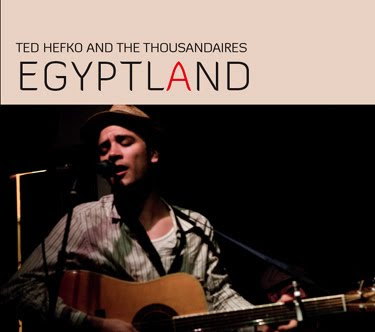 Ted Hefko grew up in Wisconsin, learning his love of music from the diverse artists in his father's collection: Bob Marley, Stevie Wonder, Bob Dylan, Miles Davis, Fela Kuti and Albert King (among others). With school on both guitar and tenor sax, Hefko began playing out in high school. After school Hefko headed down to New Orleans and a degree in Jazz Saxophone from the University of New Orleans, going on to study with Hannah Jon Taylor. Hefko has played for or with such artists as Warren Batiste, Blake Amos, Tondrae, Los Sagitarios and Los Bebes del Merengue. Hefko relocated to New York City in 2004 and has immersed himself in the city's Jazz, Rock and World scenes since then. His latest recorded effort, Egyptland blends Jazz, Southern Funk, Blues, Folk, Rock and Latin styles in almost effortless fashion.

Egyptland opens with The Roofer, a tribute to one of the many displaced from New Orleans by hurricanes (in this case, Betsy). Hefko sounds a bit like Van Morrison here on vocals and inhabits the song's character as if he lived the story himself. Wet Wool In The Rain plays with Latin sounds and Southern R&B in a delicious tune serious commercial potential. Hefko seems most at home on Twenty Three Dollars And Twenty Three Cents, a classic bit of quasi-acoustic blues, singing for all he's worth while his top notch band makes hay in the background. Hefko gets righteously instrumental on The Short Man's Complex, an entertaining tune that will have you be-bopping in your seat or even jumping up to dance. Bad Kids is something of an ode to juvenile delinquency. Not so much a tribute to it, but a retelling of one particular story that may or may not be true. The arrangement is slow and repetitive and wants to lull the listener to sleep. Egyptland closes out with Big Shoes, a pasting of phone queue jazz with some progressive tendencies.

Ted Hefko And The Thousandaires have created an album in Egyptland that runs the gamut from magic to mundane. When Hefko is on his game as a writer the music is inspired, but there are also moments here that are so tired and without energy they put the listener to sleep. Hefko is a passable vocalist with a real love for the music he plays, but the unevenness of the performance across Egyptland is a little disheartening. Closing out on an easy-listening jazz piece was also a bit disappointing, as Hefko's gig seems to be his mix of styles and originality. Nevertheless, Egyptland is a solid release with some issues, but worth checking out.

You can learn more about Ted Hefko And The Thousandaires at http://www.ted.heko.net/ or www.myspace.com/tedhefkoquartet. You can purchase downloads of Egyptland at Digstation. CD copies are available through CDBaby.com.
Posted by Wildy at 5:10 AM