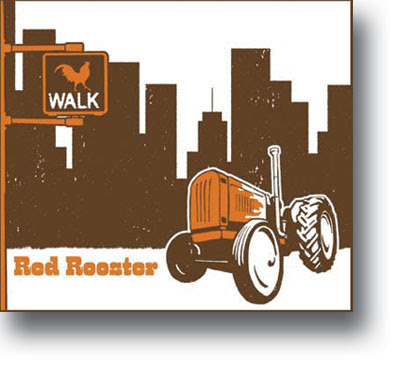 Red Rooster - Walk
2009, Wondermore Records
Red Rooster is a New York City-based Folk/Country collective that can dazzle you in many ways. Whether it's the blend of Country, Gospel, Bluegrass and Folk styles, the modern electronic elements, or good old fashioned music and lyrics, Red Rooster brings quality to all aspects of their music. Formed ten years ago by longtime friends Jay Erickson (lead vocals) and Nat Zilkha (lead guitar), Red Rooster also features Susannah Hornsby (vox, accordion), Andrew Green (banjo), Dave Gould (saxophone), Brandon Doyle (French horn), Lucas Ives (drums), Daniel Engelman (bass) and Pete Nilsson (keyboards). Susannah Hornsby is the niece of Bruce Hornsby and sister of R.S. Hornsby, and adds an extra dimension and spark. Red Rooster’s third album, Walk, will be released digitally on their website on September 22, 2009. Mixed by Grammy Winner Peter Moshay, Walk promises a lot and delivers on every count.
Walk opens with the Country/Americana gem Bluebird, featuring Jay Erickson on lead vocals with Susannah Hornsby on harmony vocals. Elements of Blues, Country, Folk mix with interesting electronic overlays to create a grand listening experience. Black Point Road has a strong Pop/Americana feel, with strong harmonies and a plaintive banjo that drives the song along. Chasing You is a bit more classic in style, mixing Country and Folk in a love song full of regret and devotion. The arrangement and musicianship here are stellar, with Erickson and Hornsby vocal lines acting the part of just another pair of instruments in a finely tuned ensemble. Hornsby takes over vocal lead on Borrowed Money, one of the more lyrically nuanced tunes on the disc. Hornsby has a sound reminiscent of Allison Krauss, and she gives a strong performance here, injecting a relatively non-demanding vocal line with a lot of angst and panache.
Leaves In Autumn is a poetic love song, drifting back to a subtlety and style more common from 1970's singer/songwriters than today; a gorgeous tune with Erickson on lead and Hornsby on harmony that you won't want to miss. Anyone who's ever held their own child for the first time with want to check out Five Tiny Fingers; it's a song about how a child can calm even the restless heart of the most prodigious drifter. Let It All Go takes the sort of relationship issues traveling musicians might face and puts into a melodramatic setting (to good effect). The song is entertaining and sad, although the premise is so fantastic it's either a bit of a stretch or too ridiculous to be anything but true. Raining In Los Angeles is classic singer-songwriter material; nuanced, complex and mature in its prose and with a simple beauty in the arrangement. The song is about the breakdown of a relationship (likely a marriage) and reflects simple truths from a complicated situation. This is easily my favorite track on the disc and would play equally as well in a coffee house as on a big stage. Time To Go incorporates a light Bluegrass feel into a song about moving on; the mix of Erickson and Hornsby's voices here creates a stark and sorrowful effect that runs counter to the faltering progress of the banjo. Ambivalence is overcome by common sense, but there's still something of a question in the back of the mind of the narrator. Walk closes out with the title track and Susannah Hornsby on lead vocals reaching for a bit of the High Lonesome sound. Hornsby digs in on this one, showing a vocal talent hinted at otherwise and firmly establishing her ability to front a band.
Red Rooster is an interesting mix of Country, Folk, Bluegrass and even some pop sensibility at times. The debate could be endless about whether Jay Erickson or Susannah Hornsby is the better vocalist, but there's no doubt that as a duo they're incredible. Red Rooster is incredibly tight as a band, and Walk is a playground where they show off their best work. Don't be surprised if Walk shows up on a host of end-of-year "Best" lists. Don't wait for the hype; get in on the ground floor.
Rating: 4.5 Stars (Out of 5)
You can learn more about Red Rooster at http://www.redroostermusic.com/ or on Facebook. You will be able to download Walk on Red Rooster’s website on or after September 22, 2009. Red Rooster is offering a you-name-your-price deal that will net you a digital package that includes the album as well as bonus tracks. Traditional CD copies will also be available at some point in the near future.
Posted by Wildy at 5:20 AM