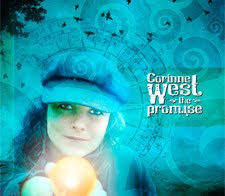 Corinne West - The Promise
2009, Make Records
Corinne West left home at the age of fifteen, guitar in hand, to travel and live with a group of traveling artists and activists. The restless spirit that drove her to that decision continues to motivate West today. As an established singer/songwriter whose won critical acclaim, you still get the impression that West gets a bit antsy if she's in one place for too long. That rambling spirit runs all through her third album, The Promise, coming November 2, 2009 on Make Records. Produced by West and Canadian musician Doug Cox, West sings from the heart with a voice that's both road-weary and jubilant at the wonder of life.

West opens with The Promise, a soft and wonderfully nuanced song about perseverance. West's voice is of earth and sky, as elemental as the heart that beats inside of her, and fills the listener with a sense of time and place that is hauntingly familiar and yet as alien as the horizon of another world. Pollen is a song buried deep in allegory. There is a love gone wrong here; the classic tale of an interloper (told in the first person) who regrets what she's done only after the consequences are abundantly clear. West tells the story in such personal terms it's as if she's living it. Having been a road warrior for some time, West knows what it's like to walk into a strange small town and look thoroughly out of place. The Stranger is a monologue on this very subject. With a haunting melody and poetic lyrics, West takes you inside of those you might see passing through your town. Lily Ann is a love song written in classic country style, even pulling in some bluegrass style backing vocals. The arrangement is nothing short of gorgeous.

The River's Fool is homespun wisdom from someone who has spent time traveling on it. It's another wonderfully nuanced and intelligent song with a gorgeous melody. West lets her warm, expressive alto wrap around Harry Nilsson's Everybody's Talkin' in an unforgettable performance that's likely to generate a lot of buzz. And if you think Everybody's Talkin' is splendid, wait until you get to Whiskey Poet. This is a pure masterpiece of songwriting. Expect Whiskey Poet to be covered ad nauseum by other artists in the near and distant future; it's a classic. Lady Luck is an ode to its namesake, done in a powerful Americana arrangement that is not easily forgotten. West then closes out The Promise with Turn The Wheel, a song about the cyclical nature of time. Turn The Wheel is an amazing bit of songwriting, full of wisdom, nuance and maturity that seems beyond West's years (but is obviously not).

Corinne West is special. There are a number of great songwriters in the Folk world, but West has a gift for making the moments and people in her songs come alive. She writes wonderfully; her arrangements are gorgeous, and her voice draws you in, wraps it's arms around you and doesn't let go. The Promise is destined to be one of the top Folk albums of 2009.

You can learn more about Corinne West at www.myspace.com/corinnewest or http://www.corinnewest.com/, where you can purchase a copy of The Promise.
Posted by Wildy at 5:20 AM