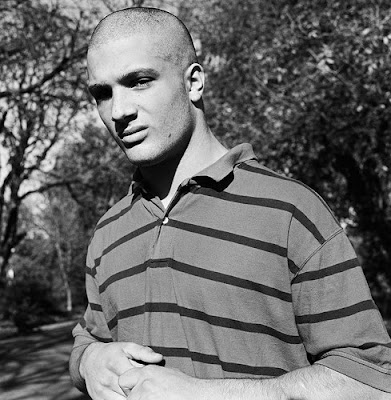 Harrison Cosmo Krikoryan Jarvis was born in New Jersey to an American/Armenian mom and a British dad. Jarvis has found his way back to his father's homeland (Newton Ferrers), where he has written over 250 songs at the tender age of nineteen. With over 100 songs recorded (and self-produced), Jarvis' recording studio is his bedroom. Jarvis even went so far as to displace his bed to the hall in order to fit all of the recording equipment in his room. Jarvis also makes, directs and stars in short films (over 40!). This prodigious level of production apparently does signify over-extension as an artist, at least to judge by the music on Jarvis self-titled album, alternately titled Hum As You Hitch/Son Of A B!tch, due out on November 3, 2009 in the UK. Cosmo Jarvis is revelatory.

Opening with Crazy Screwed Up Lady, Jarvis displays a musicality and presence that is beyond his years. His voice is somewhat anachronistic, but works perfectly amidst inspired Folk/Pop arrangements driven with hints of punk energy. Wild Humans is a humorous ditty that takes accessory pricing to a whole new level. The song is highly entertaining and active. Jessica Alba's Number is an entertaining fan-boy song and tribute all rolled into one. Featured dream girls include Alba, Jessica Simpson, Kate Winslet, Cameron Diaz, and Beyonce Knowles, Kate Nash, Jennifer Lopez and The Pussycat Dolls. The Royal F**k Up is a humorous but angry written from the perspective of an every day person who resents the views that the rich and powerful have of everyone else; in this particular case the target appears to be the British Monarchy, but the theme is a universal one. The song is tongue-in-cheek but full of the hyperbolic, repressed rage that fuels eventual social change. Sort Yourself Out is mix-tape material of another sort. Everyone knows someone they'd love to dedicate this tune to; an angry and pointed calling out and dressing down of someone who tends to have no regard for others. Jarvis closes with Mummy’s Been Drinking; another deeply angry song done as a rap that calls out a mother for hiding from responsibility/reality. The song is entertaining with a bit of the car crash mentality in there for good measure.

Cosmo Jarvis is an absolute breath of fresh air, blowing up the conceptions of traditional pop music with flair and a distinct sense for good musical decisions. Jarvis is an all-around entertainer who can write very well and hits on some real musical magic on Cosmo Jarvis (Hum As You Hitch / Son Of A B!tch). Jarvis' wit is prodigious on his debut album, but there's no air of novelty to the songs. This is a serious collection dished out with healthy doses of humor, impatience, anger, vitriol and ultimately a maturity that's beyond his years. Cosmo Jarvis is very much worth getting to know!

You can learn more about Cosmo Jarvis at www.myspace.com/cosmojarvis or http://www.cosmojarvis.com/. Cosmo Jarvis (Hum As You Hitch / Son Of A B!tch) drops on November 3, 2009. You can pre-order the album through Amazon.com as a pricey import, or you can pick it up a bit cheaper by going to Play.com and simply paying the exchange rate here in the US. If you’re buying from the UK it’s much cheaper.
Posted by Wildy at 6:39 AM

I think he's amazing, really interesting too! Check out this interview: http://www.rivmixx.com/features-listing/rivmixx-rising-cosmo-jarvis/1