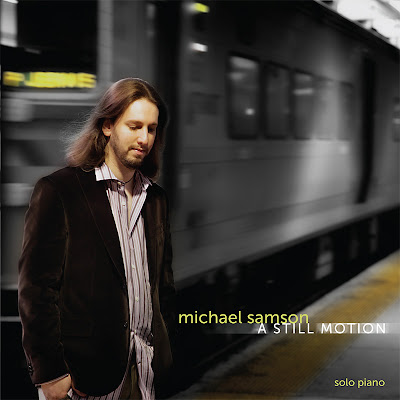 You might call Michael Samson something of an existential philosopher. Seeking a blend of metaphysics and aesthetics in his piano play and compositions, Samson tackles the juxtapositions of our inner and outer lives on his sophomore album, A Still Motion. Based on a concept that all things are inter-connected and can affect one another, albeit indirectly, Samson explores the theoretical and practical implications of these ideas in music. Formerly a graphic designer, Samson has turned his life over to music, inspired by such artists as Suzanne Ciani, George Winston, John Williams, Jerry Goldsmith and David Lanz (not to mention Chopin, DeBussey, Beethoven and Satie).

Leading off with the title track, Samson sets a tone that runs through Pop and New Age circles with relatively simplistic compositions built on contrasting rhythms between the left and right hand. Dream Not Of Today has a memorable melody line, although it never really seems to develop a full melody, but rather a thematic progression that repeats without significant variation or coloring. Samson does bring some harmonic elements into the right hand but this is more akin to window dressing than variation. Echoes For The Stanger has its own singular beauty, built on musically aesthetic turns and a halting right hand that builds tension in the composition. The darkness in much of the song resolves with about a minute to go, quickly to resume, much like the sun peaking out for just a moment on an overcast day.

Truth In Beauty speaks to the central conceit of the album, and perhaps one of the most argued points in the poetry of John Keats (Ode To A Grecian Urn): "Beauty is truth, truth beauty." Some might argue that this means that the form, the simple fact of any one thing (such as a Grecian urn) is its truth, and therefore its beauty. Applying that here, Samson may well argue that it's not so much the finished product, or song, that is either truth or beauty; it's the by-product of both. Truth and beauty are actually found in Samson's discovery of the song, which has probably existed time immemorial until Samson came along and found it. You might experience the same in discovering his interpretation of the song, but this is where the entire argument may just fall into a puttering heap and slinks off to the pub. What is evident is that no great revelation is found in Truth In Beauty; the composition is nice doesn't turn heads. When Light Dances, on the other hand, as a dramatic sense to it that might make it perfect for the cinema. Some volatility worked itself into Samson's creative process here and the result is absolutely delightful.

The Edge Of Forever and Where Ocean Meets Sky are both pleasant dalliances in the modern pop new age sound that moves units in mall stores. Of Times Long Past is a bit more ambitious, creating a mood of dark tension and seeming to tell a story (or at least trying to). Scene of 1800's England kept flooding to mind during this song, which plods along at its own pace and never fully resolves the tension that exists between left and right hand (this is part of the draw of the song). After The Rain is a somewhat mundane and long-winded penultimate track, leading into Words Left Unspoken, a halting and languorous close to an album that definitely has its highs and lows.

My gut reaction to A Still Motion is that it was a musically intellectual experience. Samson is a very good technical piano player, able to color and shade his music with all the changes in volume, speed and intensity you can imagine, but I didn't feel the artist behind it. Samson seems to have dug so far for answers in his compositions that he's left out the most essential part of the experience; his heart. Passages that should be emotional and effecting play flat; moments that should soar simply waver on the precipice of the wind but never take flight. This is one of those albums I wanted to like but never quite got there. Samson can do a lot with a piano; he can make a lot of pretty sounds and dark sounds and light sounds and string them together in interesting ways. But the glue is missing from this one.

You can learn more about Michael Samson at http://www.michaelsamson.com/, where you can buy A Still Motion in practically any format you might desire.
Posted by Wildy at 5:29 AM