Review: The Council Of Smokers And Drinkers - Grizzled 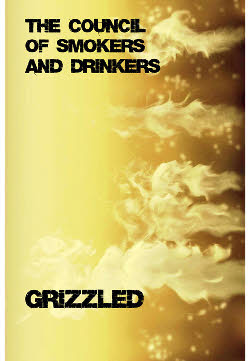 When you are surrounded by a brutal Alaskan Winter you find an outlet for energies or you go insane. For The Council Of Smokers And Drinkers, that outlet is a classic blend of Americana Music: Southern Rock and Blues dressed in dark lyrics and dash of authentic Country Rock Nashville hasn't seen in a few years. Joe Erickson (drums) and Russell Biggs (guitar/vox) got the ball rolling, eventually bringing Elizabeth Dubey (vox, keys), Jonathan Russell (guitar), Mark Kimmins (harmonica) and Mack Rogers (bass) into The Council. The band's debut album, Grizzled, features songwriting they'd be proud of in Texas, R&B based Country they'd be proud of in Mississippi and a commercial touch that Nashville will go ga-ga for.

Grizzled opens with the tasty guitar licks of Tupelo Road, a brand of Texas Country/Rock that sounds vaguely likely Harper Valley P.T.A.. Lyle Lovett and Ernest Tubb’s influences can be heard here in a classic bit sounding tune. The Best That I Could Do hits full on the Rhythm And Blues roots of Rock N Roll with a bit of honky-tonk thrown in for good measure. Try not to dance when this song spins; you can't do it. The rhythm and energy are irrepressible. Chicken In The Pan won't win many members from the Gloria Steinham society for progressive thought, but it's great Rock N Roll. Once again, you won't be able to hold back the urge to dance or at least tap your feet.

The Council Of Smokers And Drinkers are first class musicians, but their charm is amplified by vocalist Russell Biggs. Biggs has enough of that Rock N Roll magnetism in his voice to hook listeners and enough country in there to appeal to the boots and chaps crowd. Leaving Little Rock is a prime example of this, with Biggs coming across as a mix of Jon Bon Jovi and Garth Brooks. The commercial potential here is huge. Pocketfull Of Holes is a classic hard-luck song about picking up the pieces and moving on, even if you have practically nothing left. The song is incredibly catchy and will stick in your noggin; it's perfect radio fodder. Down And Out recalls a one night stand in classic country singer/songwriter style. The trip down memory lane is a sweet reminiscence for the narrator. The Council winds things up with Grass Soup, an interesting and subtle dig at the inequality of wealth in society. Grass Soup is written from the perspective of those on the bottom of the socioeconomic spectrum, accepting their lot and trying to make the best of it. The wit here is deep and cutting.

The Council Of Smokers And Drinkers are en eclectic bunch, mixing Rock, R&B, Country and Blues in an Americana blend that sets them apart from the crowd. Strong songwriting, consummate musicianship and a dynamic front man in Russell Biggs potentially sets the stage for big things for the band. Grizzled is everything you could want in a debut album. Take all of the above and add a commercial touch that Music City has forgotten how to achieve; with the right break, could be one of the biggest country albums of the year. At the very least it deserves a spot on end-of-year lists. Take some time with The Council Of Smokers And Drinkers, and don't mind the cold. It's an essential part of the sound.
Rating: 4 Stars (Out of 5)

You can learn more about The Council Of Smokers And Drinkers at http://www.thecouncil.serifweb.com/. You can purchase a download of Grizzled on iTunes. CD copies will be available on CDBaby.com in the near future.
Posted by Wildy at 5:20 AM