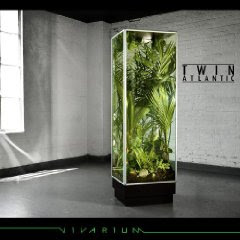 Scottish rockers Twin Atlantic exploded onto the American Scene this month with the release of Vivarium. With great press in the UK, a UK tour supporting Taking Back Sunday and performances with Smashing Pumpkins, Circa Survive and The Subways, Twin Atlantic have already proved they can play with the big boys. Vivarium marks Twin Atlantic's first foray across the Atlantic and the band will be touring the United States this fall.

Twin Atlantic opens Vivarium with Lightspeed, a distortion-filled rocker that's perfect for Modern Rock Radio. This has hit written all over it, with an anthem-like feel. It's just too bad this album didn't arrive running up to the summer as this would be a perfect summer song. Old Grey Face (And The Way Of The Magenta) retains a distinctive pop sensibility while rocking out in perfect radio fashion. Sam McTrusty's voice is a strong rock voice, made that much more interesting for US audiences by the distinctive Scottish bur. Old Grey Face devolves into guitar chaos in the breakdown, suddenly right itself and returning to form before abruptly transitioning into You're Turning Into John Wayne. Twin Atlantic explores the dichotomy of Europe's fascination/hatred of America. On one hand, some in Europe decry American Culture while adopting American music, culture and styles and even purchasing many products from here. The narrator here wants to find out what it means to be American to learn what's true. It's a well-written, intelligent song that also rocks.

Caribbean War Syndrome seems to take relationships and war overlay one on the other in terms of the tactics, advances and retreats of the relationship. The song is well written and takes on some progressive tendencies in the instrumentation. What Is Light? Where Is After? has a big crunchy guitar sound that may tend to fare it well on commercial radio. It's not my favorite song on the disc but I can see how it may have some real commercial punch. Audience And Audio is very catchy and shows tendencies to work down a progressive path, launching into extended instrumental interludes full of guitar, distortion and atypical elements for modern rock. Twin Atlantic closes with Better Weather, an introspective, wider-ranging rock tune that shows some of the grandiosity of U2.

Vivarium is a strong if somewhat mixed introduction to Twin Atlantic. Most of it played very well. The band ranges from pure Modern Rock to an almost Rush-like progressive sense with the pop grandeur of U2 thrown in on occasion. Not everything here works, but enough of it does to turn Vivarium into a potential big seller this fall. Either way, I suspect this won't be Twin Atlantic's last tour on this side of the Atlantic.

You can learn more about Twin Atlantic at www.myspace.com/twinatlantic or http://www.twinatlantic.com/. Vivarium is available for download via iTunes. Official US release date is September 29, 2009, although no online outlets are not as of publication. You can always buy the UK import from CDUniverse.com if you can’t wait.
Posted by Wildy at 5:00 AM

Labels: Circa Survive, John Wayne, Smashing Pumpkins, The Subways, The U2, Twin Atlantic