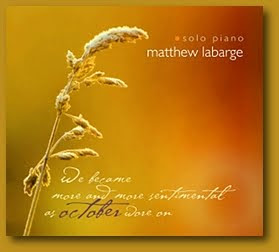 Matthew LaBarge is a composer and pianist who is also periodically an engineer in his professional life. At the age of 28 he quit his engineering job to study composition full time with composer John Hilliard. Daily piano lessons and lessons in composition turned him into a composer and pianist of considerable skill. Alas, the money he'd saved from his Engineering days ran out and LaBarge returned to the workforce, but continued to pursue music as he could. Fourteen years later LaBarge returned to music full time with the idea of rebuilding his technique, vowing to not write new music during that time. The muse never listens to the plans of men however, and LaBarge was inspired to write The Wedding Waltz for his soon to be fiancée. When she said yes, Leaves Dancing was born in celebration, and the songs just kept coming. The culmination of LaBarge's disciplinary shortfall is an album of inspired compositions called October, released in August of 2009.

LaBarge breaks the silence between himself and listeners with First Light, a gently cascading piano piece that grows through tentative half steps just like the first touch of morning light, spreading into Sunrise. Sunrise mixes the tentative gestures of a waking world, using legato passages to suggest the coming of light like the ebb of the tides. It's a gorgeous piece done in a slow, relentless crescendo. Wedding Waltz is the song that started this odyssey, and is full of all the love and hope you might imagine. Leaves Dancing is the piece that leapt from LaBarge in response to Shawn's saying "Yes". It has something of an old-time feel, like something from the score of a classic romantic film (and from listening to Leaves Dancing I wouldn't be surprised to learn that LaBarge counts Randy Newman amongst his influences).

From a potential modern influence we progress to a classical one on Prelude (Ever After), where Chopin's ghost haunts the theme and structure. Song (Kids Playing) could easily be interlude music for a Peanuts cartoon, particularly one of the segments involving Snoopy's misadventures. Cold Wind has a baroque feel to it, like something you might have heard in a parlor in Europe in the seventeenth century. Over Such Beauty takes a grand cinematic theme and allows it to evolve over nearly six minutes. The progressions and regressions here have a deeply organic feel, and you can almost imagine a plot line this composition could not so much sit behind as run through. Never So Many Colors and The Sun Sets Earlier Now are both gentle, rolling compositions you'll want to check out, and lead into the closing number, Love Song. Love Song is a brief but classic theme full of a simple beauty you won't be able to resist. LaBarge has created a fair amount of magic thus far, but saves his best for last.

Matthew LaBarge should try not to write more often. The results of this last experiment are nothing short of spell-binding. There are a whole host of instrumental piano albums out there marketed under the New Age genre, but LaBarge seriously leans more towards a classical approach to composition, with more than just a touch of cinematic flair. This is not an album for background listening; not something over which you make polite dinner conversation. You can relax with Matthew LaBarge, but really listening to October is a moving musical and cognitive experience. Whatever the month, it's a good time to get into October.
Rating: 4.5 Stars (Out of 5)

You can learn more about Matthew LaBarge at http://www.matthewlabarge.com/. Currently, the only way to get October is through mail order directly from LaBarge, which you can initiate here. LaBarge’s website indicates the disc and downloads will soon be available from both CDBaby.com and iTunes.
Posted by Wildy at 5:20 AM