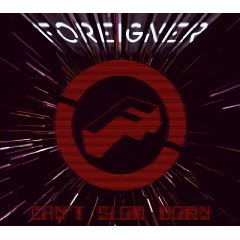 During the 1980's, few bands were as prevalent on both Pop and Classic Rock radio as Foreigner. Hits such as Cold As Ice, I Want To Know What Love Is, Feels Like The First Time, Urgent and Hot Blooded were as familiar to music fans as a song can be. When then-vocalist Lou Gramm departed the band I lost track of Foreigner and was frankly surprised to see that they had a new album coming out in 2009. Can't Slow Down hits shelves on September 29, 2009 as a three-disc (2 CDs/1 DVD) collection available exclusively at Walmart stores. For any surprise I may have had the fact of the release, it was an even bigger surprise, and pleasure, to discover that Can't Slow Down is a surprisingly vibrant and relevant Pop/Rock album.

Disc One of Can't Slow Down consists of thirteen new tracks; a mix of rockers and ballads that have the same sort of hungry energy that Foreigner had when they first broke into the music business. The title track is a brilliant bit of Rock N Roll and a tribute to NASCAR inspired by Foreigner's performance at the 2009 Samsung 500 at Texas Motor Speedway. Can't Slow Down will get a lot of play from NASCAR and their fans, and might just be the best driving song since Sammy Hagar's I Can't Drive 55. In Pieces depicts a relationship at a crossroads. Things have fallen apart, but the narrator is asking where to from here? This isn't a kiss off song, but one full of love and acceptance of the present that still holds some hope for the future. When It Comes To Love is much more melancholy, looking back on a relationship past and what might have been, having realized that what he had is what he wants; the perfect song for the lovelorn.

Longtime fans of Foreigner will be more than pleased with Give Me A Sign, which sounds like it could have been lifted right off one of their early albums, and I'll Be Home Tonight also has their signature sound in a ballad that has serious chart potential. My favorite track on the disc, however, is a number called Too Late. This too has the classic Foreigner sound, and a vivacity that is striking. The chorus will get stuck in your head and stay there all day long. If I had to pick one song to release as a single from the album it would be As Long As I Live, a classic ballad that's certain mix-tape magic. Adult-Contemporary and even Pop radio could make this a huge hit. Rockers Living In A Dream, Ready and Angel Tonight also will be certain crowd pleasers, as is the ballad I Can't Give Up. Can't Slow Down closes out the new material with Fool For You Anyway, a soul-flavored Rock ballad that might have even more potential than As Long As I Live.

Disc Two consists of remixes of some of Foreigner's most famous songs, done by Marti Frederiksen (Aerosmith, Buckcherry, Guitar Hero) and Anthony Focx (Guitar Hero). Hits such as Feels Like The First Time, Cold As Ice, Hot Blooded, Head Games, I Want To Know What Love Is and Jukebox Hero get retooled to clean up the sound of the sometimes thirty-year old master recordings. The DVD included in the package features live performances of some of Foreigner's biggest hits, including performances from their most recent European tour. Also included is a documentary about the making of Can't Slow Down and footage of the Walmart shareholders meeting where the deal was made to release this album exclusively.

Aside from a clip on the DVD that panders a bit too much to the Walmart shareholders' egos, Can't Slow Down is perhaps the most exciting release from Foreigner since the late 1980's. You never know what you're going to get when one of these long acts releases new material, but Foreigner is as vital and relevant today as they were twenty-five years ago. The re-tooling of the classic material simply improves on the sound quality and definition of the recordings, a treatment they should have received some time ago. Foreigner has proved that they Can't Slow Down; let's hope that never changes.

You can learn more about Foreigner at http://www.foreigneronline.com/ or www.myspace.com/foreignermusic. Can’t Slow Down drops on September 29, 2009. You can pre-order your copy at Amazon.com.
Posted by Wildy at 5:43 AM