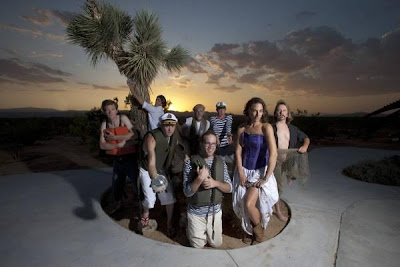 When Brian Setzer covered Louis Prima's Jump Jive An' Wail back in the mid-1990's, he ignited a hunger for music from and inspired by the Swing era that opened the door to popular success for a lot of bands who might not have otherwise had the opportunity. One of those bands was the Squirrel Nut Zippers. While the Squirrel Nut Zippers aren't a swing band, per se, a number of their tunes do fit the category. Writing with a cinematic zeal, Squirrel Nut Zippers tell stories in song with whatever sound fits the storyline. Their esoteric approach has left critics scratching their heads for the appropriate descriptive language while beguiling and befuddling fans. The band took a break from public life in 2002, staying in exile until 2007 when the core of the band headed back out on the road. On October 27, 2009, the Squirrel Nut Zippers release a live album, Lost At Sea, documenting some of their biggest hits from over the years as well as giving a fine aural picture of where the band stands more than a decade after the light of celebrity first shone upon them.

Lost At Sea opens with the Swing/Funk of Memphis Exorcism, recalling the 1950's Jazz Era of the deep south. The instrumental runs about 2 1/2 minutes and sets the stage nicely for an even full of music and dancing. The crowd at Brooklyn, NY's Southpaw is clearly audible and very much into the show. You will be too. Good Enough For Grandad blows the roof off the joint on just the second song with a serious New Orleans flavor and Jimbo Mathus on vocals. It's a song about reverence for the past and reflects an "old-time" philosophy that still makes sense even in a post-modern world. Not too mention there's some pretty hot jazz going on here. It Ain't You displays the other vocal personality of Squirrel Nut Zippers. Katherine Whalen has a voice boiling over with sensuality while retaining a sound that is pure-1930's gin-joint jazz. The hot swing carries over into Prince Nez. The roof already blown off, the Zippers tear down the walls and stomp on the floor boards for good measure.

Up next is Put A Lid On It, a moderate radio hit for the band back in the mid-90's. Mathus and Whalen sing call and response with Whalen exuding a raw animal nature of an old-time film star like Jayne Mansfield. Danny Diamond is the story in song of a burlesque star who came to a less than desired end; the song shows The Zippers ability to create magic at a slower speed and is a great listen. Suits Are Picking Up The Bill has long been one of my favorite Zippers songs, and is presented here with an extended opening and a more refined than the original studio cut. The sound here is a mix of Dixieland and BeBop. The Zippers move through Happens All The Time and Bad Businessman on their way to Hell, one of their bigger radio hits. The dark and deranged swing here will hook you immediately if you don't already know the song. Jimbo Mathus takes over the mic with all of the swagger of an old-school band leader in an inspired performance.

Ghost Of Stephen Foster is a darkly entertaining tune that seeks to right a wrong from the great composer. It's a zany trip into an unreal world for no reason at all, and the arrangement is amazing. Blue Angel finds Whalen at her best, laying down a vocal line full of hope and fear wrapped into one delicious song. The Zippers stand back from their usual bombast with a measured performance full of nuance and finesse. Do What comes forward for a 1950's Rock N Roll sound in a seven minute opus guaranteed to have you shaking booty and singing along for all you are worth. This is essentially the closing tune to the album, although there is a 49 second epilogue entitled Missing Link Parade tacked on to the end.

The Squirrel Nut Zippers have always sounded just a bit messy. Eschewing highly produced and refined musical grooming for an organic live sound has been heir style since they first broke on the popular music scene. Lost At Sea captures their live sound in its natural habitat - the stage. For a band that took five years off they haven't lost a step. Lost At Sea documents the Squirrel Nut Zippers of 2009 in highly complementary terms. Now all we can hope for is some new material in the not too distant future.

You can learn more about the Squirrel Nut Zippers at http://www.snzippers.com/ or www.myspace.com/snzippers. Lost At Sea goes on sale October 27, 2009. Expect wide availability. But if you can’t wait, you can get the CD in advance of the release date through the band’s website. This opportunity has yet to start, but keep checking back to the Zipper’s website for more information.
Posted by Wildy at 5:20 AM