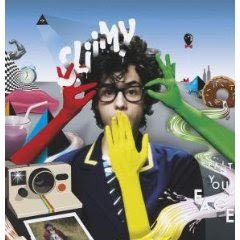 Sliimy - Paint Your Face
2009, Perezcious Music/Warner Bros. Records
French sensation Sliimy has ranked as the #1 trending topic on Twitter as well as garnering over one million streams on MySpace without ever releasing an album outside of France. Paint Your Face went to #2 in France, earning gold record certification while Sliimy was still in high school, and allowed Sliimy to gain opening spots for Katy Perry and Brittany Spears on their European tours. Sliimy has shaken the stodgy world of music critics with a sound fresh and full of the exuberant energy of youth, being compared to a pre-adolescent Prince. Discovered by Perez Hilton, Sliimy is the first artist on his Warner Bros. Records imprint, Perezcious Music. Paint Your Face will be released digitally in the United States on September 15, 2009.
Paint Your Face opens with Wake Up, an infectious dance-oriented pop tune that's a can't miss hit. It's pure bubblegum, but the sort that gets in your brain and takes over your thought process. Sliimy walks the line between rap and Jason Mraz style lyrical streams over a toy keyboard and a tight quasi-acoustic dance arrangement. Magic Game follows a similar dance approach but brings some crunchy guitar into play to give the song a vaguely harder edge. If you check out the cover of Paint Your Face you'll note the cover photo finds Sliimy exploiting the Prince comparisons, which are not entirely unfounded in Pop sensibility, but no one will confuse Sliimy and Prince musically. The material presented stays firmly in the Bubblegum Pop and Dance realm. Sliimy spends the entire album singing in falsetto, occasionally blurring gender lines with a voice that's not always discernable (ala Angel from Rent).
Songs such as Paint Your Face, Baby and Trust Me all follow a similar path, acoustic based Dance/Pop with an infectious nature and no real meat to grab onto as a listener. This is music for moving, not pondering and is thoroughly enjoyable for what it is as long as you're not seeking an intellectual listening experience. Mum slows things down a bit both rhythmically and emotionally. Full of angst and regret, Sliimy seems to mourn the loss of something here but it's not entirely clear what. Tic Tac has all the earmarks of a major Pop Hit; this is the sort of song that could go Gold and even Platinum across multiple countries and musical charts. Don't be surprised if Tic Tac is eventually released as a single and becomes omnipresent in popular culture for a couple of months. Ditto My God, the sort of simple Pop/Dance/Love song that makes household names. Womanizer attempts to get to some meat, but is too repetitive and is frankly handicapped by Sliimy's singing voice which is something of a difficult listen. On the faster, Pop-oriented tracks this is hidden by a dearth of legato phrases and rapid-fire lyrics, but where his voice is more exposed Sliimy has a lot of difficulty maintaining a concrete relationship with the appropriate key. The result is a quirky sound that is interesting, perhaps even cute at first, but wears on the listener after a while.
Sliimy seems like the perfect candidate for fifteen minutes of fame. With a quirky sound, a distinctive look and a lot of viral buzz likely dreamed up by a brilliant marketer and a chance encounter with media whore Perez Hilton, Sliimy will likely dominate the US airwaves for a time, only to join the likes of Jordy, Newcleus, Right Said Fred and all of the other bright yet brief comets who have burst upon the Pop music scene over the years and disappeared almost before we knew they were gone. There is some real songwriting talent here, but the presentation is so atypical and musically limited that the honeymoon isn't like to be a long one.
Rating: 3 Stars (Out of 5)

You can learn more about Sliimy at http://www.sliimy.net/ or www.myspace.com/sliimy. Paint Your Face hits virtual and real shelves on September 15, 2009. Expect wide availability through both brick-and-mortar retail and through online outlets.
Posted by Wildy at 5:22 AM

Just wanted to give a heads up that I'm having a contest where you can win a Music Tee version of Sliimy's Album "Paint Your Face."