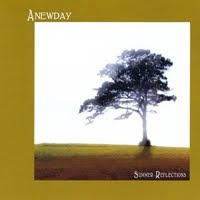 Anewday opens with Summer Rush, reminding me of David Foster's more Pop oriented work. Summer Rush features a Pop theme that's cinematic in scope and falls under the short and sweet category. Reverie is a sweet and lyric composition that is made by the orchestration. Solstice is my favorite track on the disc. Hints of Chopin are evident in a song that straddles the Classical/Country divide in a fashion that's exceedingly odd and interesting. Celtic Farewell is interesting insofar as there's nothing about that really suggests it relates to Celtic music at all. Place Of Solitude is a pretty piece with a lilting, sweet melody.

I heard hints of John Tesh's early popular work in Future Beginning. The essence here is sound rather than composition in a work that is pleasant but doesn't seem to have real lasting significance. Astronomical Convolutions made me chuckle, seeming to echo flashes of the melody line from Irene Cara's Flashdance at various points throughout, almost as if it were an abstract variation on the theme. The song itself is modern and vaguely regal in effect and is actually quite the interesting listen. Solar Moons has a martial, perhaps even clockwork feel to it. I didn't enjoy this as much as it seems to rely too heavily on the mechanical and too little on the emotional/spiritual. Revival is along the same lines, having a mechanical, artificial feel to the energy and rhythm of the song. Anewday closes out with Whispering Streams, a Lloyd-Webberian theatrical piece that's big in presentation but stylistically bland.

Over time we've drawn a lot of solo-piano submissions. Summer Reflections is neither the best nor the worst, but somewhere in the middle. When the orchestration is at its best, it seems to challenge the piano and lift the whole game of Anewday. Otherwise things tend to get a little flat at times and perhaps even a bit derivative. There are some nice moments here (Reverie, Astronomical Convolutions, Summer Rush) but much of the album is simply decent. If you're looking for new-age styled dinner music with a modern Pops touch, the Anewday's Summer Reflections is right up your alley.

You can learn more about ANewDay at http://www.anewday.ca/. You can purchase a copy of Summer Reflections from CDBaby.com.
Posted by Wildy at 4:55 AM