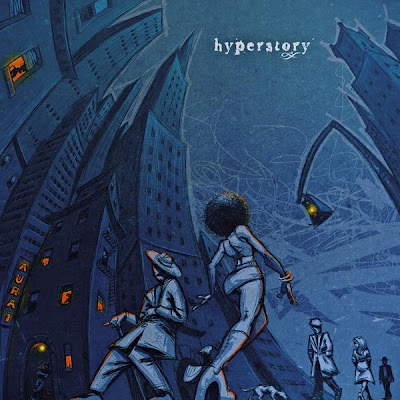 Hyperstory is the brainchild of Los Angeles musician C. Scott Blevins; a loop-driven mix of organic and electric/electronic rock crafted brick by brick. Blevins recorded in numerous spaces with varied personnel and setups to bring sonic variety and an old school feel to Hyperstory, his debut album. Brooklyn, NY's Julian Cassia contributed vocals to the project, and instrumental support came from Joey Waronker (Beck); Deron Johnson (Seal, Miles Davis); Chris Chaney (Janes Addiction) and a host of other friends and acquaintances. Blevins aimed to not only make a collection of great songs, but a great album in the classic sense. Hyperstory will be available on November 10, 2009.

After a brief Prelude, Hyperstory gets things moving with A Happening, a plodding mellow pop tune full of a melancholy angst that closes with something akin to Gregorian Chant. As an opener it's quirky enough to get your attention yet just bland enough to make you hunger for a bit more. Something Good takes a more vibrant tune, sounding something like The Moody Blues might if they were starting out today. Something Good has the right hooks and sound to break the radio wall with the right push. Will It Ever Change is a post-ambient rock tune with Chicago-style horns and an impassioned flair that flows from the previous, spoken word track, Mandate. Ascension gets a legitimate dance beat going and brings in the funk early and hard. The horns are here again, this time sounding a bit more like Tower of Power. This is a great instrumental track. Hyperstory closes out with two pleasant but essentially innocuous instrumental entitled A Reckoning and End Story, respectively. Both continue to vein established on Will It Ever Change and Ascension without really providing anything to the conversation.

Hyperstory is ultimately an album I walked away from with mixed feelings. There were a couple of great moments (Ascension, and to a lesser degree Something Good), but the rest just really didn't move me one way or the other. Hyperstory is a pleasant listen, but not something that compels me to come back. Perhaps it's all just a little too lush and a little too well produced; good songwriting but no risks. Risks are essential.
Rating: 3 Stars (Out of 5)

I like what I've heard from this release, and would love to play it on my radio station. Can you provide me with any contact info on the band or label?