Review: F&M - Every Light Must Fade 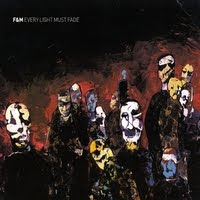 Edmonton, Alberta is the home to F&M, a quintet that has grown from power couple Ryan and Becky Anderson. Comparisons will be made to Leonard Cohen, Neil Young, Natalie Merchant, Feist and Nick Cave, but don't let the darkness fool you. F&M writes strong music dealing with difficult issues with a positive outlook (or at least the hope for one). Their latest album, Every Light Must Fade, deals with death and loss from the perspective of a life cycle where death means new life or new beginnings. Ryan (vox, guitar) and Becky Anderson (vox, piano, accordion, guitar, cymbeline) are joined by Brian "Miot" Reichert (lead guitar, vox); Chad Andriowski (percussion) and Kevin Anderson (bass). Ryan Anderson claims the band once sucked, and it’s hard to be debate such subjective outlooks, but there are definite highs and lows here.

Every Light Must Fade opens with the title track, a dark and ambling tune acknowledging that the end comes to us all in stark and poetic terms. Ryan and Becky Anderson manage to create some moments of beauty in the darkness, he with his somewhat gruff voice and her ethereal harmonies. Stuttering Boy is our first opportunity to hear Becky Anderson in a lead vocal capacity. Her voice is eclectic and unique and interesting to listen to; ranging from a fluttering and ischemic soprano to a full and warm alto. Lyrically the song is a bit halting and awkward, but the overall effect is a positive one. Bad Advice From A Bad Singer is all about fearing the end; the sort of insecurities most people have about what comes after death, if anything. It's well-written and addresses the issue without taking sides with regard to beliefs.

Becky Anderson shows the more pleasant side of her upper range on Rising To The Moon; a voice that's part Marian Call and part Hope Sandoval. Anderson shines in this dark piece about not getting where you want to be and the inevitability of death/failure/loss. Shy is a repetitive and circular picture of social awkwardness; lyrical paucity and a skittish acceptance of self are at the center of this song, which works on several levels. Industrious displays the lyrical awkwardness that seems to be one of the trademarks of the band; as if thoughts come in halting and difficult leaps. You Will Die is a stark reminder of the obvious, starting with the most story of the most unlikely and most-well known case of all. The repetitive nature of the arrangement is the driving force of the song; given its incessant and semi-urgent quality. Another Closing Number emphasizes the dichotomy of age; how we crave more when we have less and vice versa. It's an examination of human nature in darks and lights that is perhaps the most perceptive and well-written song on the disc. F&M closes out with a hidden track, The Grey Havens, an ethereal, angelic fugue that celebrates one conception of the hereafter.

F&M takes on difficult material on a difficult album in Every Light Must Fade. I can't say I enjoyed the album, yet I somewhat liked it nonetheless. This is a listening experience that makes you uncomfortable and pushes at your buttons. It's messy and dark and buoyant in its own Cimmerian waters. Ryan and Becky Anderson have voices that are distinctive and intriguing, and when they sing together they're at their collective best. Every Light Must Fade is going to be a difficult experience for some; it's not clean and easy to listen to, but it's a robust artistic statement on mortality, done in the fumbling awkward terms in which we tend to address the subject. Are you up for a challenge?

You can learn more about F&M at http://www.fandmtheband.com/ or www.myspace.com/fandmtheband. You can purchase a copy of Every Light Must Fade at CDBaby.com. If you like renting your music, you can download it through iTunes.
Posted by Wildy at 5:00 AM