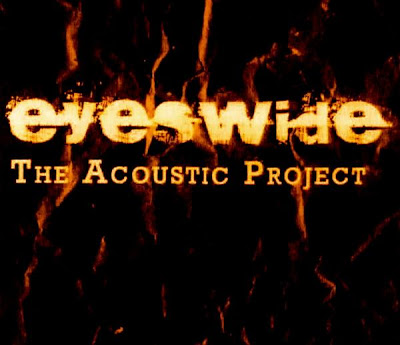 Neil Crowe is a Barrie, Ontario singer-songwriter who is paying his dues on the Toronto music scene. Playing five nights per week, Crowe has lately taken on the moniker Eyeswide when performing acoustically. The Acoustic Project CD is a collection of nine tunes that have been stripped down to just Crowe, his guitar and voice. Crowe has an ability to build a rapport with his audiences; let's see how this carries over into the recorded media.

The Acoustic Project sets sail with What Do You See, a short, simplistic tune that's perhaps more of an Epilogue than anything else. There's a morose, depressive feel to the first track that carries over in part to E-Dub. The refrain here is repetitive to the point of breaking, perhaps the desired effect given the near-obsessive feel the song has. The narrator is in love unrequited, perhaps, and still pushing for a response from his intended. #22 opens with a guitar riff that's reminiscent of Dave Matthews but fails to show much of real lasting effect. Further Down The Road continues in the depressive-state that is strongly reminiscent of The Smiths. Part of this is fed by Crowe's voice, which is dark and textured like a rough grain bread. Armor Up picks up the pace a bit, but still has that same emotional monotone going on. Conscious Man and Eustress continue in this emotionally numbing musical path, sinking further and further into a sort of pious destitution. A Song I Think She Might Like and Man On Fire, both of which seem to try and separate themselves from the morbid sense of loneliness that pervades the album, but neither can quite pull free of its gravity.

Eyeswide may as well get points for emotional honesty, but the presentation and tenor of The Acoustic Project just doesn't won't add up to repeat listens for most music fans. This was a difficult disc to sit through; not because it's bad, but it came too close to sitting down next to someone on the train or bus who begins to pour their life in all of its sadness and loss on your shoes. I know there are folks who get into the sort of self-possessed tales of woe that are on The Acoustic Project, and some of them may even like what they hear here, but it's difficult to recommend.

You can learn more about Eyeswide at www.myspace.com/eyeswidetheband. As of publication date, Eyeswide’s MySpace page indicates that the album will be titled, simply, “Eyeswide” upon release. No release date is yet available.
Posted by Wildy at 5:00 AM