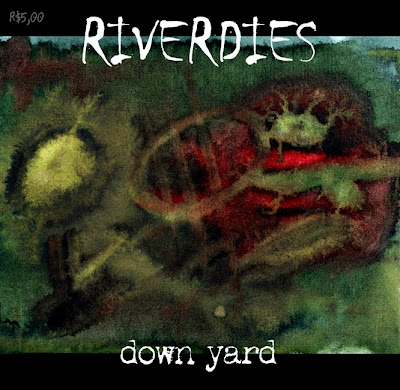 Riverdies is a Rio de Janeiro-based rock band with big dreams, big melodies and a wide variety of musical influences. Together since 2000, Riverdies has built a strong following in their native Brazil and is looking to spread their music beyond its borders. Featuring Alex Melch on vocal and guitar; Fil Buchaul and Leo Graterol on guitar, Gui Farizeli on bass/vox and Victor vonDraxeler on drums, Riverdies rocks with the best of them. Their latest album, Down Yard, just might have what it takes to make some noise in North America and beyond.

The slow burn intensity of Pearl Jam crossed with the harder edge of Soundgarden or Alice In Chains is an apt way to describe Riverdies; bringing back the days of Grunge with a melodic vengeance. Down Yard opens with I Wonder, a big angry rocker that only deviates from the Seattle sound by incorporating a classic rock guitar solo. Riverdies steps back a bit further, walking the line between 1980's Pop/Metal and Grunge on Background. Vocalist Alex Melch is an affable and competent front man with an ideal voice for this material, although he never seems to really push the limit vocally. Riverdies slows things down a bit on Morning Dies, something of a melancholy power ballad. The musicianship here is particularly notable with distortion stripped away; the layering of guitars creates a smooth sound with a lot of vitality and movement underneath.

Riverdies takes off the gloves with Build A New Life, a big dynamic rocker with guitar work reminiscent of Tommy Shaw & Ted Nugent in their Damn Yankees days. Melch finally makes the leap and goes to the wall on a demanding vocal line that stretches his limits. Fate is a sleepy tune that works well in contrast to Build A New Life. There's a lot of interesting stuff going on in the multiple guitar parts here, although it does get a little overcrowded at times. Riverdies says goodnight with Cliff, perhaps the most interesting and unusual track on Down Yard. Cliff takes a complex melody and builds it into a shifting musical framework is too involved to be improv but a little too wild to be set in stone. Cliff would allow for a lot of room to play, particularly in a live setting.

Down Yard is an impressive if somewhat dated offering from Riverdies. The primary style here is the Seattle Grunge sound although it's been tempered by touches of 1980's Rock and lyric, singer-songwriter styles. Riverdies is dynamic and different enough to get attention. Their melancholic presentation usually works in Rock N Roll, and the songwriting is strong enough not to get stuck in a rut thus far. Take a chance and check out Riverdies; they just might surprise you.

You can learn more about Riverdies at www.myspace.com/riverdies or http://www.riverdies.com/. No online outlet could be found for Down Yard, but if you contact the band through their MySpace page I’m sure they’ll
Posted by Wildy at 5:05 AM

The guys are pretty damn good!!!

Awesome rock band! Thanks for the tip!
Kisses