Review: Tad Dreis - The Reluctant Hook (and the day that it caught) 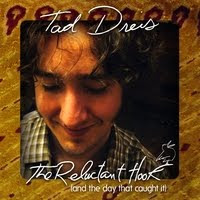 Tad Dreis - The Reluctant Hook (and the day that it caught)
2009, Tad Dreis

Tad Dreis comes from vibrant Chapel Hill, North Carolina music scene that helped launch bands such as Hootie & The Blowfish and Edwin McCain to national prominence. Writing and performing quirky Folk/Pop tunes can be a tricky game, but Dreis has a real knack for finding the perfect hook or turn of phrase. Comparisons to Robyn Hitchcock and Loudon Wainwright III as they might have sounded jamming with the Beatles are apropos. Dreis releases his third album, The Reluctant Hook (and the day that caught it) drops on September 11, 2009. With Dreis' wide touring and acclamations in the past few years (including a 2006 nomination from APCA as Best Solo Artist), The Reluctant Hook might just be the album that breaks things wide open for him.

Dreis is a singer-songwriter with a focus on traditional style story songs that occasionally stray into uncharted territory. A prime example is the opening track, The Makeup Company; a tune about an experience with a call center with supernatural powers and a penchant for showing off. It's an amusing tale that seems almost plausible based on past experience. Button For You is pure Americana, stylistically similar to Blue Rodeo or Wilco. It's a song about being so caught up in the day-to-day that you can't enjoy the things that really matter. This is primo songwriting. My Backstory is all about the perils of becoming well-known, particularly all of the "truths" that become public knowledge without ever being checked for accuracy. The arrangement and even Dreis' voice call to mind fleetingly Canadian quartet Moxy Fruvous.

Blues For Werner is a lovely tune about the more melancholy aspects of being a truck driver. It's a gentle arrangement full of affection that stands out because of its pure honesty. Very often in life our basic comforts revolve around the most simple of material items, be it a pair of comfy jeans, or a blanket (ala Linus from Peanuts). The Rug That Swore is the story of a boy and his carpet. Yes, it's a bit odd but so sweetly done you'll find yourself getting into it. It's a great tune. Three Forms Of Media explores all the methods for hooking up in a modern age (phone, eMail and hand-written notes), and how those methods can be used to push things awry when someone isn't playing fair. It's a humorous tune with a sudden twist at the close. Advice For Ladies highlights the advantages of a woman having a "humorous gay friend". It's an amusing tune with more than a little truth to it. Dreis closes out with I'll Be There and Pear Blossoms, both decent tunes but perhaps lacking a bit of the mischievous glint that pervades the rest of the album.

Tad Dreis is a stellar singer-songwriter who happens to have a mildly twisted sense of humor. His approach is a classic one, able to appeal to a broad spectrum of fans. Intelligent lyrics with wicked turns and strong melodies make The Reluctant Hook (and the day that it caught) an outstanding listen, even if it things tail off a bit at the end.
Rating: 4 Stars (Out of 5)

You can learn more about Tad Dreis at http://www.taddreis.com/ or www.myspace.com/taddreis. You can purchase The Reluctant Hook (and the day that it caught) as either a CD or download through CDBaby.com.