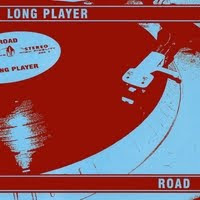 Road combines the edge of Modern Rock, the crunchy grit of a 1960's Garage Band and a bass player with Funk running in his veins. The Doylestown, Pennsylvania trio rock for all they're worth in their third album, Long Player. Paul Waters (vox, keys, guitar) sounds a bit like John Lennon at times, with J.D. "Jed" Schumann holding the line on drums, percussion and vox. Ben Cleal makes it all work in the middle with electrifying bass work. Long Player was mixed and mastered by Ted Richardson and Shelly Yakus (John Lennon, Tom Petty, U2) at Cedar Street Studios in Philadelphia, PA.

Road opens with Long Player (Jackie's Ruse), sounding a bit like the Beatles jamming with the Knickerbockers. The song itself is very catchy, and Cleal adds an incredible amount of texture to the song with a bass line that erupts all over the place. Come Back Home has a sounds like early Who. If this song were released 40 years ago it would have been the biggest thing on radio. Little Guatemala takes on a heavier sound, digging into a serious garage realm with a fun tune about a relationship gone sour told from the third person. This is all done with a deft storytellers touch, big rock hooks and a melody that sticks around once the song is done. Don't Know Why is the song that will put Road on the map; a catchy, funky rocker with real potential for college radio and beyond. This is great pop songwriting all around.

There's a definite Beatles vibe on Count The Stars, right down to the "perfect pop song" style arrangement. You'll want to dance and sing along. The same goes for Even Real, with its funk-laden bass line and energetic interplay between the three members of Road. For pure dance-ability this the primo pick of the litter. The Sunday Song (Jackie's Demise) is a strong mix of modern sound with a 1960's Garage aesthetic. Cleal and Schumann provide a funky backbeat and bass line to drive Walters' smooth to smiteful vocal line. This is yet another great tune that would have ruled the airwaves had it been released in the late 60's or early 70's. Road closes out with Six Bottles Of Beer, a paean to the weekend and what it takes to find companionship sometimes. This one is very tongue-in-cheek and provides a good chuckle to say goodnight.

Road is one highly entertaining band; they certainly haven't forgotten the roots of Rock N Roll on Long Player. Boomers will think they've found a fountain of musical youth here, but Road keeps things fresh enough to interest younger rock fans. These are guys I'd definitely go see live, as the show would be a hoot. There's an inherent sense of humor running deep below the melody, like the band is sharing a joke that's passed back and forth between the instruments. The humor breaks loose on the final song, but that spark of mischievous wit is always there. Long Player might not be gourmet music; it's more like comfort food. You'll keep coming back.

You can learn more about Road at www.myspace.com/roadstuff or http://www.brownelephantrecords.com/. You can purchase Long Player through CDBaby.com or as a download via iTunes. If you're the brick and mortar type, Long Player is being distributed through Independent Record Stores across the US.
Posted by Wildy at 5:10 AM

Labels: Abbey Road Studios, John Lennon, The Beatles, The Knickerbockers, The Who, Tom Petty, U2