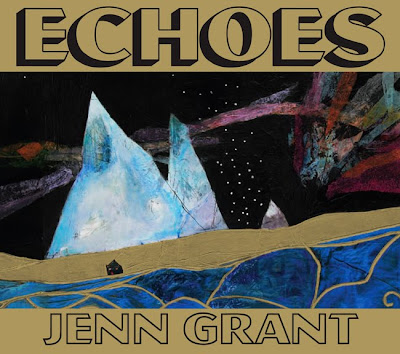 If you don’t know who Jenn Grant is, you might want to make the calendar for today as the day you first encountered her. Besides being Wildy's World's Artist of the Month for September, 2009, the Prince Edward Island, Canada native has made a name for herself with highly personal songs that flow from the heart like warmth from the sun. Grant has earned several East Coast Music Award nominations, and opening slots for such Canadian artists as Martin Tielli (Rheostatics), Hawksley Workman, Hayden, Great Lake Swimmers and The Weakerthans. Grant releases her third CD, Echoes, in the United States on September 29, 2009. Echoes, continues in the same, heart-on-her-sleeve vein under the guiding hand of Producer/pianist Jonathan Goldsmith (Bruce Cockburn). Echoes may be a challenging listen, and is certainly a bit off the beaten path, but is worth the time you’ll put into it.

Echoes opens with the rambling, pensive Heartbreaker, which rises out of the depths of melancholy sounding like the Yin to Feist's Yang. This impression is fed by both Grant's shadowy alto voice and a quirky, Feist-like nature drawn in burgundy and charcoal. Where Are You Now is a beautiful song of longing and loss with an almost classical feel to it; the accompanying string arrangement lends a depth and weight to balance Grant's lyric vocal line, creating a moment of musical beauty that is deeply tangible. Blue Mountains has a vaguely dream-like feel to it; a love song built as much on the ideal of running off together as in stand still. It's an unusual and beautiful testament to emotion that's part Be Good Tanyas and part Feist. Parachutes is a wonderful conglomeration of Emo art song and girl-group glitz (although only briefly). The song is dark and light and thoroughly ambivalent on love, life and anything else that's important. It's a statement from the heart in all of its mixed beauty and darkness in song.

I Was Your Woman has a strong link stylistically to Fiona Apple; a look at what was and the process of getting over the loss. Grant's voice is full of dark sorrow here, wrapped up in that gorgeous alto with a metal edge running through the center. This song could be something of a show-stopper, but it's also imbued with that sort of temporary madness that comes with heartbreak. You'll think that Jenn Grant took a sabbatical with The Be Good Tanyas filling in on (I've Got) The Two Of You. Gorgeous vocal harmonies and an Appalachian feel inform this Chamber/Folk/Rock tune. The chorus is a bit repetitive, but it works here in a song deeper in emotion than thought. Sailing By Silverships sounds like the culmination of sonic development of the female songwriter in the past twenty years wrapped into one shining moment. Fans will hear elements of Tori Amos, Sarah McLachlan, Fiona Apple and even Sinead O'Connor in this fantastical song juxtaposing the pain of loss with the search for understanding and purpose. The rhythmic and layered crescendo and then fade at the song is as powerful as a musical moment gets without words to accent meaning.

Fireflies takes on a distant country feel, accented by the presence of violin and hints of pedal steel guitar; wandering the magical corridor of catching lightning in a bottle and the fear of doing so. The arrangement here is beautiful in a vaguely haunting way, demanding the listener's attention with variegation and texture that usually resides far from anything in the popular realm. Hawaii continues the process of recovery, finding magic and the loss of words to describe it. Grant's voice is right on the raw edge of emotion here, deep within an arrangement that's full of gorgeous quirk. The cover of Neil Young's Only Love Can Break Your Heart might seem a bit cliché at first, but Grant's performance makes it anything but cliché. It doesn't quite measure up to the Waltons' cover from the 1990's (perhaps not even Young's original does), but it's likely the second best cover of the song I've heard. Grant closes out Echoes with Everybody Loves You, a song of mourning of what's been lost and of hope for what's to come. There's a core of emotional strength here that's so apparent it will practically bowl over the listener. A brief epilogue, a half minute of I'll See You Again features Grant on piano sounding as if the recording were pulled from an old vinyl copy.

Echoes is an album full of heartbreak and hope. It is an acknowledgement of what Grant learned halfway through writing the album; Echoes is a breakup album born of a tumultuous relationship Grant was in at its beginning. In this case life imitated art, as it was the songwriting process that helped Grant to see where her heart was going. Consequently Echoes is a highly personal album full of the shadows and dark closets of Grant's heart as well as the patches of light. Pathos and power mix to inform the human spirit in the process of loss across the thirteen songs presented here. There are moments of beauty in both light and shadow, as Grant reveals her heart in a much more intimate fashion than you might expect. Echoes is brilliant in so many dimensions because it features Jenn Grant eschewing any sense of popular acceptance in favor of straightforward, honest writing. The song craft is highly involved and entrancing, and Grant's voice mixes elements of beauty and with starkly unique qualities to create a listening experience you simply can't pull yourself away from. I like an album to challenge me as a listener; Echoes does. And it's well worth the challenge. Echoes is a Wildy's World Certified Desert Island Disc. Don't miss it.

You can learn more about Jenn Grant at http://www.jenngrant.com/ or www.myspace.com/jenngrant1. Echoes drops in the US on September 29, 2009. If you can't wait until then you can purchase a copy of Echoes at Maple Music, or you can download the album through iTunes.
Posted by Wildy at 5:20 AM