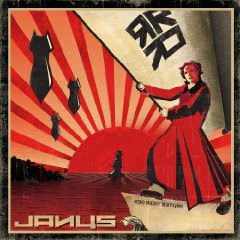 Janus - Red Right Return
2009, REALID Records
Chicago quartet Janus is shaking up the world of Rock N Roll with a sound so fresh and original it jumps out the speakers and dives right into your skull. Generally eschewing the trend of trying to sound like everything else on the radio, Janus creates a brilliant Rock-based soundscape on the quasi-concept album Red Right Return, out September 22, 2009 on REALID Records. Lead vocalist David Scotney has the sort of edgy vocal sound that sets him apart from the crowd. Johnnay Salazar (percussion) and Alan Quitman (bass) form one of the more intriguing young rhythm sections in Modern Rock, allowing guitarist/programmer Mike Tyranski tremendous playing room to expand and expound. You may have previously heard Janus's music on shows such as MTV's Road Rules, The Real World and Bad Girls Club as well as NBC's The Science Of Love.

Red Right Return opens with the polyrhythmic drumming and grinding guitar sound of Six Letters Sent, a song set to rip the head off the Modern Rock Radio monster and take the airwaves by storm. Infusing vocals harmonies right out of 1980's Glam Rock and an edgy vocal line with a Bono-esque urgency make this a winner all around. Maybe It's You plays the classic power ballad card excruciatingly well. The full, layered guitar sound supports a dark and soaring melody line in an effort that could chart anywhere from the 1980's on. Say It is a bit more cookie-cutter, sounding not entirely dissimilar from the current citizenry of Modern Rock radio, but retains the edge that sets Janus apart.

The album's first single, Eyesore has already received significant radio exposure and aims for the line between Rock and Emo Singer/Songwriter territory. The ranging melody line vacillates between lyric opera of the damned and the scream aesthetic that's overwhelmed the Emo and Hardcore worlds. In the end it's fairly generic radio fodder. Skin Deep, on the other hand, takes to task the importance we give to superficial qualities. It's a powerful song on content alone, and the big, layered guitar sound amplifies that power like an aural sledgehammer. The Nerve strikes an interesting chord that blends the spirit of Radiohead into an almost Progressive Modern Rock envelope. This turned out to be my favorite track on the disc although I wasn't too keen on it the first time I heard it. Janus says goodnight with 100 Years, pointing out the long-term significance of the minutia we tend focus on in day-to-day life. It's a cogent bit of social commentary that emerges as a universal theme that's run through the whole of Red Right Return from the beginning.

Janus is an intriguing band, striving to be original in a genre where most anything you can think of has been done based on re-arranging simple notes into cognizant patterns. Derivation is the name of the game, and finding a combination that's both pleasant and quasi-original is difficult, but Janus manages it at points on Red Right Return. True, there are some songs here that fit the Modern Rock Radio mold, but more often than not Janus rocks right off the beaten track. Red Right Return is nicely done.

You can learn more about Janus at http://www.janusmusic.com/ or www.myspace.com/janus. Red Right Return hits shelves (both literal and virtual) on September 22, 2009. You can pre-order the CD through Amazon.com, but expect wide availability at both brick and mortar and e-commerce outlets.