Review: I M Munroe - I Am Here 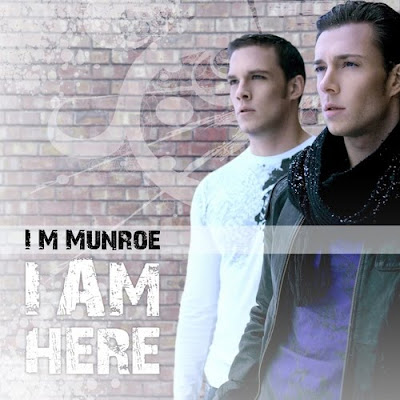 Ian and Mark Munroe share familial and musical bloodlines, an element of the chemistry displayed on their debut album, I Am Here, released August 25, 2009. The Toronto-based brothers have followed their own paths professionally but have been playing music together since they were teenagers. Ian is a Mechanical Engineer who spent six years working in the auto industry, while Mark is a professional model and actor who has appeared in Cosmopolitan, UMM and other publications as well as appearing in national commercials and music videos. Ian plays guitar and sings lead while Mark provides harmony vocals and writes lyrics for the band. Matt Lloyd sits in on the drum kit for I Am Here, which is produced by Wayne Routledge.

I Am Here opens with I Used To Love You, a relatively bland pop tune with a mildly catchy chorus. I M Munroe stays relatively bland for Fool, although Ian Munroe has a voice vaguely reminiscent of Jim Morrison. That's My Life steps out and shines with a catchy arrangement and a real sense of energy. The songs thus far are decent, but there's a stoic sense about the Munroe brothers that makes it hard to know for certain whether they're enjoying themselves. I Am Here retains that stoic sensibility, but the energy improves and I M Munroe seems to be loosening up a tad as the album progresses. Should Have Known Better marks a real coming out for the band, emerging at least partially from their serious composure in a song about a relationship headed south wrapped in a peppy arrangement (ala The Cure). Lyrically, the song is fairly representative of the material on I Am Here, that is to say that the lyrics are a bit young in presentation and not terribly refined. This actually works with the sober vocal style of Ian Munroe and the general trend in arrangements, but perhaps doesn't serve the material as best it might. One More Day breaks from the imperturbable with a heart felt but self-serving ballad where the protagonist refuses to let go of something that's already gone. I M Munroe leaves us with Here In Bed; either a bittersweet reminiscence or quasi-delusional time slip in song.

I Am Here is too burdened down in its own emotional weight to ever really fly except for the best tune on the disc; Should Have Known Better. Here Ian and Mark Munroe create a viable pop tune with melancholy lyrics that folks will want to listen to. The rest of the album reflects a young, musically undeveloped band with some talent but a lot of work to do. Perhaps the biggest benefit would come from broadening the instrumental make up of the band and involving a new voice/perspective in the songwriting process (not necessarily as a primary songwriter but as a source of creative tension). I Am Here is a decent listen, but not one that calls you back.